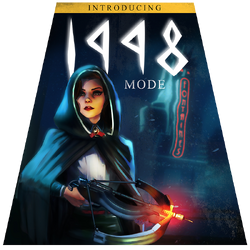 1998 Mode is a game mode in the BioShock Infinite downloadable content Burial at Sea - Episode 2. 1998 Mode focuses on stealth gameplay.

The challenge is to complete the entire episode using only non-lethal methods. The mode restricts the weapon selection to the Crossbow and the Air Grabber. The Plasmid selection is the same, except for Possession, which will affect the enemies but they will continue as normal (except for when the right upgrade is added).

Retrieved from "https://bioshock.fandom.com/wiki/1998_Mode?oldid=304793"
Community content is available under CC-BY-SA unless otherwise noted.