BioShock Wiki
Register
Don't have an account?
Sign In
Advertisement
in: Spoilers, There's Something in the Sea

A Child's Garden of Cyphers 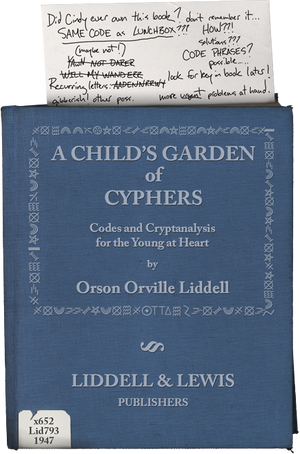 A Child’s Garden of Cyphers was a book written by Orrin Oscar Lutwidge using the alias “Orson Orville Liddell” and published by his company, Liddell and Lewis Publishers, in 1947.

Mark Meltzer used this book to decipher the symbol code on several puzzle boxes which he found while searching for his kidnapped daughter, Cindy.

This symbol code, referred to as “Lutwidgian cipher” covers the outside of the Lunchbox Puzzle, and is used in unlocking the various levels of the Metal Box. It can also be seen on the cover of the book itself, where it forms a rectangular border around the title. This border, when decoded, reveals the message:

Starting from the top left reading to the right:

Reading in the opposite direction down the left side:

“Read now and be wary”

Notably, many word combinations in this message form an anagram of “Andrew Ryan”:

In November, Mark received Cindy's personal copy of A Child's Garden of Cyphers from his estranged wife, Amanda. This copy was much dirtier than Mark's, and it had Cindy's signature on the front, along with a short cypher warning: "KEEP OUT!!!"

This copy of the book could be opened to a page containing a cryptic word search puzzle. The symbol filled grid of this word search doubles as an ADFGVX cipher [1] for solving the fourth level of the Metal Box puzzle.

The word search contains cypher sybols that, when translated, read:

(Bold letters were circled in the book.)

The following text is on the adjacent page.

(Highlight the white blocks with your pointer to see the answers.) 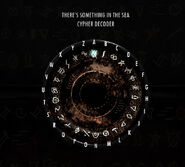 A decoder made from a dial on the Lunchbox Puzzle.

Cipher text on the front of the Lunchbox Puzzle.

A cipher message from inside the Lunchbox Puzzle. 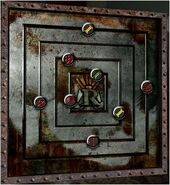 The cipher buttons on level one of the Metal Box Puzzle. 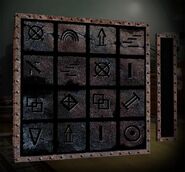 The front of the 4x4 grid of the Metal Box Puzzle. 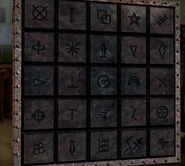 The 5x5 grid of the Metal Box Puzzle. 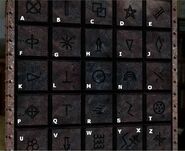 Cipher letters in the sand in a photo taken by Mark Meltzer.

All tiles combined and decoded. 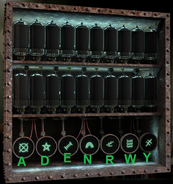 A message from Cindy.