Transcript: The genius of Sofia Lamb is a thing of empathy, a profound moral sense; I can only describe her... as a kind of... of secular saint. But dividing her loyalty evenly across the world at large spreads it so thin as to be invisible to some. Love... I have found, is... beneath her. Naturally, Ryan arrested her... gave her to Sinclair to incarcerate somewhere. But upon her escape, she took the city... and changed my life forever.

Location: In the backstage area of the Triton Cinema. 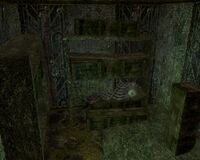 Retrieved from "https://bioshock.fandom.com/wiki/A_Secular_Saint?oldid=320369"
Community content is available under CC-BY-SA unless otherwise noted.