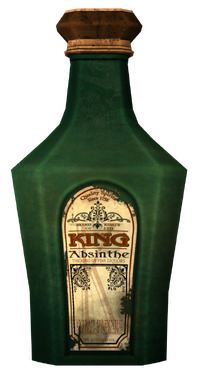 King Absinthe is one of several different types of alcoholic beverages found in Columbia and Rapture during the events of BioShock Infinite and Burial at Sea.

Unlike every other alcoholic beverage found around Columbia, Absinthe drains your current Health by half, but fully replenishes your Salts. As with Unknown Booze, it only takes one bottle for Booker DeWitt to become inebriated. It is the opposite of its BioShock counterpart, as Moonbeam Absinthe increased health and drained EVE.

Absinthe makes another appearance in both BioShock Infinite's downloadable content: Burial at Sea - Episode 1 and Episode 2. The effects of the drink have been reversed, so that now it provides health, but drains a bit of EVE.

A large number of empty bottles can be found in Jeremiah Fink's personal Prayer room, along with painted graffiti and numerous cobwebs. An additional amount was drank by a prisoner in Fontaine's Department Store's Manta Ray Lounge, who eventually committed suicide.