“Poor things… what a life. Marchin’ around playin’ Daddy until some Splicer manages to kill off their Sister… and then if the coma doesn’t take ‘em they turn maniac… nothin’ left to do but scream.”
― Augustus Sinclair[src]

The Alpha Series, a type of Big Daddy, was the first functional line of protectors to be bonded to Little Sisters and was the predecessor to all other Big Daddy models. They are introduced in BioShock 2 as a new type of enemy. Other types of functional Big Daddies include the Bouncer, Rosie, Rumbler, and Lancer (introduced in Minerva's Den).

The Alpha Series were the first prototypes of a failed line of Protectors developed by Dr. Yi Suchong. The line was created by Dr. Alexander using prisoners from Persephone Penal Colony as test subjects. Each member of the Alpha Series began as a test subject for various Fontaine Futuristics Plasmids, and they retain some Plasmid abilities as a result. The bodies of the Alpha Series were less drastically modified than the later models when placed inside their suits and they, unlike later Big Daddies, did not have their skin and organs permanently grafted to their diving suits. For example, only Alpha Series can remove their helmets. Functioning Alpha Series such as Subject Delta were still heavily spliced, granting them greater strength and stature than most citizens.

This bond proved to be too effective, as each Big Daddy in the Alpha Series became essentially useless if their Little Sister died from having her Sea Slug harvested by Splicers or saved by Brigid Tenenbaum's antidote plasmid. Any Alpha Series model that was not rendered comatose as a result of his Sister being lost descended into emotional instability to the point of psychosis (Gilbert Alexander recalls seeing one Alpha Series crying at a Gatherer's Garden in mourning for his Little Sister in one of his audio diaries). The Plasmids and Tonics the candidates were exposed to destabilized them further, as rips in the armor of Alpha Series encountered in Fontaine Futuristics reveal their skin as lumpy and grotesque. The remaining prototypes employed by Sofia Lamb and Reed Wahl were only useful as foot soldiers, as their suicidal aggression made them unfit for anything else.[1]

Unlike other types of Big Daddies, the Alpha Series are always hostile to the player and will attack on sight immediately, eliminating any chance to prepare. Like Subject Delta, the Alpha Series prototypes are not as heavily armored as later production-line Big Daddies. As a consequence, they cannot withstand the same level of damage, though they are still significantly tougher than standard Splicers (other than Brute Splicers, which have roughly the same level of health and strength as the Alpha Series). They are also vulnerable to bonus damage from headshots, such as the Rivet or Spear Gun, and take 50% increased damage from explosives.

Alpha Series models appear in the BioShock 2 levels Fontaine Futuristics and Inner Persephone, and in Operations and The Thinker of the Minerva's Den DLC. They have six times the health of standard Leadhead Splicers. However, their reduced durability compared to other Big Daddy types is balanced by their increased speed, better combat flexibility, greater damage output, and tactical intelligence. They also appear in greater numbers than other Big Daddies, often attacking in pairs or in concert with Rapture Family Splicers. Like Subject Delta, Alpha Series come equipped with a variety of firearms, including Shotguns, Machine Guns, or Launchers, all of which possess the same upgrades that the player has chosen for their own weapons.

Unlike all other Big Daddies, Alpha Series models are always hostile unless under the effects of the Hypnotize 3 Plasmid.

Alpha Series are drastically different from production line Big Daddies in both behavior and combat style and as such, most, if not all, standard Big Daddy tactics do not apply when combating them. The following section is specific to Alpha Series, and does not cover other Big Daddies:

Concept of the Alpha Series (center, with Subject Delta concepts), as seen in "Deco Devolution". 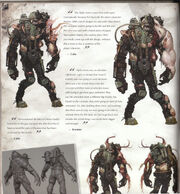 Concept art for the arm of the Alpha Series Big Daddy. 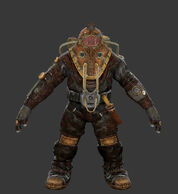 Rendering of the Alpha Series seen in Fontaine Futuristics.

Rendering of the Alpha Series suit seen through the eyes of a Little Sister.

An Alpha Series in combat in The Protector Trials.

Alpha Series about to emit its "Plasmid Outburst".

An Alpha series targeting Subject Delta with a Launcher.

An Alpha Series close up.