BioShock Wiki
Register
Don't have an account?
Sign In
Advertisement
in: There's Something In the Sea Characters

There's Something in the Sea
Amanda Kay Meltzer is Mark Meltzer's estranged wife, and the mother of Cindy Meltzer. She left him when he became obsessed with tracking down the events surrounding Cindy’s disappearance. She had Mark admitted to Tollevue Hospital, and filed for divorce upon his release, stating that Mark “through both deed and neglect, did recklessly endanger the safety and well-being of his spouse and family.” She appears to have given up all hope of finding Cindy, but still shows concern for Mark’s well-being and safety, warning him about Detective Benny Stango. Her personal attorney is Charles Molley.

"Mark, I've asked you to stop calling. If it's really that important; yes, I'm pretty sure Cindy had that cipher book you asked her about by Oliver Liddell or whoever, in fact I think you bought it for her. She was all crazy for spy stuff and that was the only code book they had in store. I guess it's pretty popular. And Mark, that detective keeps coming around: Benny Stango. I think he thinks… I don't know what he thinks; he's wrong. But watch your step around that guy, alright?" 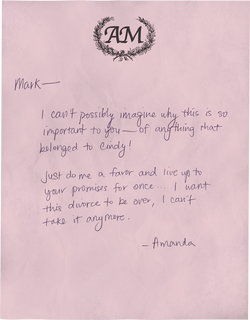 I can't possibly imagine why this is so
important to you - of anything that
belonged to Cindy!

Just do me a favor and live up to
your promises for once… I want
this divorce to be over, I can't
take it anymore.