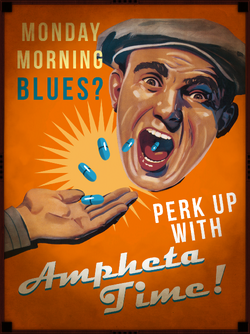 Ampheta Time! is a recreational drug sold in the underwater city of Rapture.

Being a city where the moral and ethical constraints found on the surface were not an issue, the entrepreneurs starting up businesses in Rapture could profit of anything they liked and could sell. One of these products were Ampheta Time!, a blue pill containing an undisclosed amount of the stimulant amphetamine. The pill would increase the attention and activity of the user, which the workingmen of Rapture would likely enjoy.

A physical example of the pill is never encountered, but private detective Booker DeWitt and his client Elizabeth finds an advertisement for the pill in the Toy Department's storage of Fontaine's.

Elizabeth comes across advertisements for the drug in the Service Bay in Bathyspheres DeLuxe of Fontaine's. As the Service Bay was a place of manual labor, the ads were placed to provide the workers with a solution for potential fatigue.

Retrieved from "https://bioshock.fandom.com/wiki/Ampheta_Time!?oldid=305129"
Community content is available under CC-BY-SA unless otherwise noted.