“I just got the word to put the bump on Anna Culpepper. This isn't some gangster or hard-nosed political operative. We're talkin' about a dizzy twist what wrote a song or two that got under Ryan's wig!”
― Sullivan[src]

Anna Culpepper was a well-known musician in Rapture who eventually wrote songs that were critical of Andrew Ryan and Sander Cohen.

Before she arrived in Rapture, Culpepper was an English major whom Andrew Ryan had recruited during her third year of college. In Rapture she took up a career as a lyricist, and in the beginning, she collaborated with Sander Cohen on works such as the song performed at the opening ceremony of Rapture.[2]

Culpepper also held a seat on the Rapture Central Council, although Andrew Ryan eventually regretted allowing her to gain the position because of, in his opinion, her counterproductive input. Compared to the other members of the council, she was not reserved when it came to voicing opinions that were against Andrew Ryan's own ideals. She suggested that the Council should allow citizens to take excursions to the ocean surface as long as they stayed close by, and was skeptical of Ryan's certainty that nuclear war between surface nations was inevitable. Culpepper did give Ryan the idea to educate Rapture citizens about splicing to reduce the risk of problems caused by overindulgence. This idea was the main inspiration for Ryan's "Jim & Mary" series of public address announcements.[3]

Anna Culpepper was friends with Andrew Ryan's mistress, Jasmine Jolene, and Jasmine turned to Anna for advice when Jasmine discovered that she was pregnant. By that time Culpepper was fully opposed to Ryan, so she tried to convince Jasmine that he was a dangerous tyrant and she should stop relying on him to care for her.[4]

As the Rapture Civil War worsened, Culpepper took up a new role as a protest songstress. On one notable occasion, she openly performed her songs before a mob of citizens outside of the First Bank of Rapture during the bank run in the aftermath of the 1958 New Year's Eve riots.[5] She was also a frequent patron of The Fighting McDonagh's Tavern, where she met with her friends to discuss rebellious ideas.[6] Ryan called Culpepper's efforts "Communist versifying" and promised to ensure that "the little Red bird stops singing."[5]

Anna Culpepper ran further afoul of Ryan when she began to sing songs criticizing Sander Cohen, whose music she felt was little more than a propaganda tool for Ryan. She went as far as producing the scathing album "Ryan's Songbird", with a caricature of Cohen on its cover. Though she was well-reviewed with many "column inches", this direct attack drew the line for Cohen, causing him to become enraged,[7] having many posters for the song taken down, which he hid in his own apartment.[8] According to the diaries of Security Chief Sullivan, the feud between Culpepper and Cohen intensified to the point that Andrew Ryan involved Sullivan's security detail.[9] Ryan eventually ordered Sullivan to kill Culpepper.[10] Reluctantly, Sullivan complied.[11]

Anna Culpepper's body was left in the bathtub of her Mercury Suites apartment in Olympus Heights, and the player can find it there during their journey through the area.

A quote by Anna Culpepper can be read in one of the loading screens for the DLC on the PlayStation 3 (the quote also appears in the main game). A "Ryan's Songbird" poster can also be found near the ticket booth in Rapture's Grand Carnival. 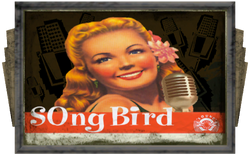