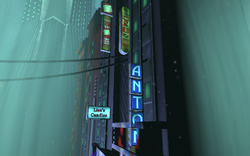 Anton was a business in Rapture.

Though the business is never encountered during the events of BioShock, advertisements for it can be seen around the city. Neon signs promoting the shop can be seen on buildings during Jack's descent into the city via Bathysphere. Later on, in Apollo Square, the same marquee can be seen in the transit tunnel to the Artemis Suites.