“A man builds a city at the bottom of the sea. That's a marvel. Another man happens to be on a plane that crash lands on the same city in the middle of the ocean. Why, that sounds more like… a miracle.”
― Andrew Ryan[src]

Flight DF-0301 was an Apollo Airways transatlantic flight which crashed into the mid-Atlantic in 1960. The plane was en route to London from San Francisco, carrying eighty-nine passengers and six crew members, including the protagonist of BioShock, Jack. It crashed into the north Atlantic Ocean, leaving Jack as the only survivor, and beginning the events of the game.

The wreckage of the plane is briefly explorable in the first level of BioShock, as Jack swims to the Lighthouse. A large piece of the fuselage sinks almost immediately (nearly crushing Jack), but many small pieces remain on the surface, along with a raging fire from spilled fuel and many personal effects from the other passengers. Over the sound of the ocean, the faint cries of the dying passengers can briefly be heard in the distance. At least three burned bodies can be found floating in the water.

The two largest recognizable pieces of debris on the surface are a wing section, engulfed in flames, and a slowly sinking section of the plane's tail, with the logo and running lights still clearly visible along with the flight's registration number. It is this tail section that crashes into Rapture minutes later, as Jack explores the city for the first time. The tail damages a glass tunnel, blocking it and causing flooding, but Jack is able to climb through the section and make it to the other side using an exit door at the back of the plane.

Later, during the segment of the game when Jack finally meets Andrew Ryan face-to-face, Jack sees flashbacks to the time of the crash. It is revealed that Jack, who had been under the control of Frank Fontaine using the phrase "Would You Kindly", actually hijacked the plane after reading the phrase on a note attached to the gift he was carrying. The gift turned out to be a pistol, along with instructions to crash the plane at a specific location, (63° 2' N, 29° 55' W), thereby fulfilling Fontaine's plan. 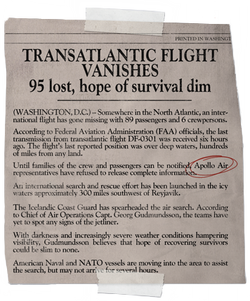 The reason for the crash was never determined by international investigators, causing many speculations to be put forward by conspiracy theorists in relation to the effects of "The Frozen Triangle". This theory is actually close to the truth, as it attempts to explain the disappearance of planes and ships in a wide stretch of ocean around Rapture's location.

A newspaper clipping from some time immediately following the crash mentions an international search and rescue effort in the area approximately 300 miles southwest of Reykjavík, Iceland. This area is a significant distance from the site where Jack initially hijacked the plane (63° 2' N, 29° 55' W), which may explain why the search efforts were unsuccessful. The Icelandic Coast Guard launched a search effort by air while American Naval and NATO vessels combed the sea for any sign of the missing jetliner.

One of these vessels was an American nuclear submarine, which eventually (an unknown period of time after the end of BioShock) arrives at the real scene of the crash to find debris still floating on the surface of the ocean. This submarine is attacked by several dozen Rapture bathyspheres carrying Splicers, who slaughter the crew and apparently capture the submarine and its missiles, although this only happens in the bad ending of the first game. The submarine's involvement and subsequent loss is apparently a closely guarded secret, mentioned only as a rumor in "The Frozen Triangle" book from There's Something in the Sea.

In BioShock 2, the tail of the plane is briefly visible lodged against some rocks in the distance during the first ocean walk in the Adonis Luxury Resort level.

A mural of the plane crash is also present in the entrance to Little Eden Plaza and Pumping Station 5 in Siren Alley. The Splicers of the Rapture Family revere it as a holy event which brought Jack to Rapture to punish the evil of Andrew Ryan.

On the multiplayer level Neptune's Bounty, the tail section appears as a walkway in the piles of random objects to a platform with a grenadier Turret. This is just for aesthetics, as it being there does not make sense against the timeline and story of the game.

During the Multiplayer's epilogue, one will see the front section of the plane crashing extremely close to the player's apartment. Andrew Ryan makes an announcement that all duties are suspended until a passenger who survived and infiltrated the Lighthouse is found.

After Elizabeth is captured by Atlas and injected with truth serum, she finds herself inside the airplane's bathroom. The lights flicker and Elizabeth changes appearance from the time she is first met (BioShock Infinite) to her current status, after which the bathroom falls apart and Elizabeth wakes up, representing the crash. Later, when Elizabeth is struck with a wrench by Atlas, she finds herself once again in the bathroom, which rewinds from the crash to the plane's normal state and Elizabeth walks out to the hallway. She sees Jack open his "gift" and threaten the steward as the note from Atlas with the activation code flies by, revealing the trigger phrase. Elizabeth also witnesses the airplane crash into the ocean right at the Lighthouse after she is struck one more time by Atlas. A post-credits scene shows the tail section of the plane float down into the city of Rapture a year after the episode's ending, signaling Jack's arrival and the beginning of BioShock.

Inside of the Plane.

The tail section, almost a decade after crashing into Rapture.

Submerging front section of the plane.

Elizabeth seen in the airplane bathroom.

The tail of the plane sinking towards the city in 1960.
Add an image to this gallery

Retrieved from "https://bioshock.fandom.com/wiki/Apollo_Air_Flight_DF-0301?oldid=322498"
Community content is available under CC-BY-SA unless otherwise noted.