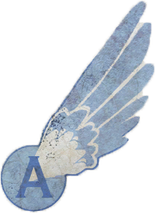 Apollo Worldwide Airways Inc. was a commercial airline that catered to the travel needs of three characters in the BioShock universe. They offered trans-atlantic flights, their only known destination is London, England. The only known plane in Apollo Airways' fleet is a Boeing 707 with yellow and blue livery.

On August 26th, 1939, Charles Milton Porter traveled with his wife Pearl Porter via Apollo Airways to London in order to work with Alan Turing. Their flight departed from Philadelphia at 7:15 AM, and arrived in London at 3:29 PM. There were no noted disturbances on the flight.

Baggage tag.
Add an image to this gallery

In 1960, Apollo Airways suffered a tragedy, the loss of flight DF-0301 over the Atlantic Ocean. The plane, en route from San Francisco to London, carrying eighty-nine passengers and six crew, was hijacked at (63° 2' N, 29° 55' W). The sole survivor of the plane's crash into the North Atlantic was Jack.

“The airline that Katie takes to go to Europe, we never named the airline, but their logo is an ‘80s brand update to the airline that Jack’s plane crashes into Rapture. So in a completely unenforceable way, theoretically, we have caused all of these universes to coexist.”

Boarding pass for Flight No. 270 leaving Amsterdam Airport Schiphol (AMS) Gate 72B to Portland, Oregon with a transfer via Cincinnati, Ohio.

Interior of pamphlet. Service from various US cities to Europe. Flight No.1 881 left Portland, OR for Amsterdam on July 6, 1994.
Add an image to this gallery

Retrieved from "https://bioshock.fandom.com/wiki/Apollo_Airways?oldid=322300"
Community content is available under CC-BY-SA unless otherwise noted.