“Come on, folks, show your allegiance to flag and to the nation!”
― Barker[src]

The Arcade is a section of Battleship Bay in Columbia, designed for indoctrinating young children with the Founders' ideology under a thinly veiled guise of entertainment, amusements, and stories. The primary attractions are the Edwardian Era penny arcade games: cabinets featuring mechanical puppet shows of the Dimwit & Duke series, which can be activated by a switch for viewing. The first Motorized Patriot is encountered here, though it is locked inside a glass booth for photographing and is non-hostile.

Booker DeWitt and Elizabeth find themselves in Battleship Bay following their escape from Monument Island. The young woman relishes her newfound freedom, but her rescuer is more apprehensive about their environment. The two proceed in through the Arcade in their quest to journey to and board The First Lady.

“Make sure you have a piece of photographic identification ready for presentation.”
― Policeman[src]

The entrance is where tickets can be purchased to enter the Arcade. Outside the entrance, on the Upper Boardwalk, the populace is shell-shocked to see the ruined Monument Tower. Inside, police agents are on high alert after the incident at Raffle Square. A large police checkpoint is there when Booker and Elizabeth arrive. The constables are frisking everyone who comes in and Booker is sure to be exposed. Here, Elizabeth's talent for lock picking is first revealed, as she and Booker evade the checkpoint. Pete, a local drunk, can be found with a Flask of Unknown Booze next to the locked door.

“This ain't no place for you, sir. You best be on your way, or there's gonna be trouble for us both.”
― Bathroom Attendant[src]

After unlocking the door and crossing through a ticketing office, the duo find themselves in a small storage room with broken machine parts and tools, and where an African-American man can be found scrubbing the floor. They pass through the storage room/workshop into a hallway containing a Dollar Bill machine, and a closet with a Gear piece and Voxophone inside. To the left is an adjacent hallway with ostracizing propaganda posted at its entrance. Down this hallway are the segregated bathrooms for use by non-white and Irish citizens of Columbia, who are unwelcome in the nicer, cleaner facilities reserved for "proper folk". Signs discouraging back talk toward said folk can also be found. If Booker had chosen to throw the ball at Jeremiah Fink at the Raffle earlier in the day, then the Interracial Couple can be found in this hallway. They gratefully offer Booker a Gear piece. 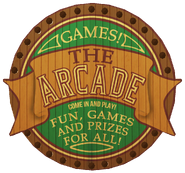 “Hey! Flawless Flintlock! It's the newest one in the series. I read it was delayed THREE TIMES.”
― Elizabeth[src]

In the Arcade proper, dozens of Dimwit & Duke arcade cabinets can be found around the room offering Founder propaganda to the youth of Columbia. In the back of the room, a George Washington Motorized Patriot is set up behind a glass display allowing photo opportunities for children. A Cotton Candy vendor can be found near the souvenir desk. While the children frolic, their parents discuss less lighthearted subjects. Several adults can be heard conversing about the activities of the Vox Populi, others gossip, and a woman flirts with Booker if he approaches her. Provided that Booker chose to throw the ball at the Interracial Couple, Mr. Flambeau can be found here with a Gear piece, "compliments of Mr. Fink."

“Why is one bathroom for colors and the other for whites? Seems like an unnecessary complication.”
― Elizabeth[src]

The cleanliness of the White-only bathrooms compared to that of the Colored is immediately apparent. The bathrooms themselves are very well-kept and the men's restroom contains the game's most well-known appearance of Absinthe. A Salts phial and two purses can be found in the women's restroom. Outside the bathrooms, a Kinetoscope can be found to add to the "Sightseer" Achievement/Trophy. To the right of this, a bigoted woman is heard scolding her son for fraternizing with Irish girls.

Upon going up the stairs across from the Motorized Patriot display, Booker and Elizabeth will encounter Esther Mailer outside the exit to Soldier's Field. She will initiate a brief, awkward conversation with Elizabeth, asking if she is "Annabelle" and acting as if they know each other. Taking the bait, Elizabeth corrects her and reveals her name. Esther comments "Isn't that a lovely name", before walking through the turnstile.

Past Esther and on down the hallway is the very large and ornate ticket room. On the inside of the room, there are several Citizens who watch you enter. One of them is playing the violin and will cease once you get close enough. Upon your heading to the ticketing booth, an attendant is talking on the phone to someone and suggests they "Send in the Bird." Booker has the option to draw his weapon on the attendant or demand tickets, with both leading to similar outcomes. The attendant will then slam the cover shut on his booth, and Esther will lead several men ambushing the duo.

Booker dispatches the undercover force with quick brutal action, sending Elizabeth running away in shock. Before he can pursue her, the place will lock up, and a squadron of combat police agents will show up and attack. After defeating the reinforcements, Booker can search the office to the right of the adjoining hallway, pick up the Infusion in the ticket booth, and go after Elizabeth. Once reunited, Elizabeth and the player ascend in a gondola and enter Soldier's Field after having a tense conversation.

The directions to the bathrooms.

"Do not speak to to the patrons unless spoken to first!"

"Keep this area clean; it is your job."

"Mind your manners amongst your betters."

A worker scrubbing the floors.

The couple at the Battleship Bay arcade.

Elizabeth tries out some cotton candy.

A photo opportunity with George Washington.

Their looks tell you that something's not right here.

The attendant behind the booth.

The ticket booth attendant raises his hands after being threatened by Booker.

Failure to draw a weapon will make the attendant get the drop on Booker.

The gondola to Soldier's Field.

A view of the stab wound.

A view from Battleship Falls.