For the audio logs made in Columbia, see Voxophone. 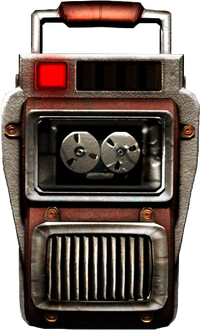 “Recording the thoughts and lives of Rapture citizens for five years and counting.”
― Advertisement[src]

Audio Diaries (or Audio Logs) are the main narrative device in BioShock, BioShock 2, and Burial at Sea. They were recorded by citizens of Rapture, either as notes for themselves or as messages for other residents. Picking up an Audio Diary stores it automatically in the associated in-game menu while offering to play it by entering the key associated to the last one found. However, a handful of plot-crucial diaries throughout the games play automatically as soon as they are picked up.

The recording device which plays Audio Diaries is the Accu-Vox Personal Voice Recorder, a product of Fontaine Futuristics, which started manufacturing it more than five years before Rapture's Civil War.[1]

The original format for the Audio Diary messages, seen in the 2006 E3 BioShock Tech Demo.[2]

Advertisement for Accu-Vox recorders in BioShock and BioShock 2. 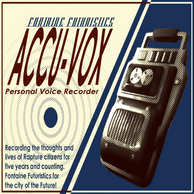 Real-life Accu-Vox recorder given to There's Something in the Sea event participants in Las Vegas, NV.

The frame appearing over the recorded citizen's photo in BioShock. 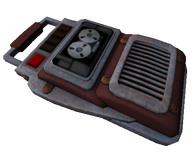 Accu-Vox recorder in Burial at Sea.

The device used by Subject Delta and Subject Sigma to listen to Audio Diaries.

The frame appearing over the recorded citizen's photo in BioShock 2.