BioShock Wiki
Register
Don't have an account?
Sign In
Advertisement
in: Spoilers, Articles needing citations, The Rapture Family,
and 3 more

“You do business as long as I have, and you learn to pick a brand name from the writin' on the wall.”
― Augustus Sinclair[src]

Augustus Sinclair, Esq. was one of the key figures in Rapture's science community as well as a prominent businessman. His business, Sinclair Solutions, was one of the most important Plasmid-researching companies in Rapture, and he is a significant character in BioShock 2, guiding Subject Delta to Eleanor Lamb.

Augustus Sinclair was born in Panama some years before 1914. His grandfather worked on the Panama Canal,[2] and believed that he was doing a service for the greater good. The drowning of his grandfather as a result of this effort impressed upon Sinclair the idea that the only worthwhile efforts were self-serving. Sinclair eventually moved to Georgia in the United States with the hopes of striking it rich by his own business endeavors. With Southern charm and business savvy, Sinclair made a name for himself and attracted the attention of industrialist Andrew Ryan. When Ryan created Rapture, Sinclair took the invitation out of a desire to further his own gain.[1]

Sinclair eventually became one of Rapture Society's top men, with his creation of several successful businesses. In the early days of Rapture's construction, when the original Sinker platform was moored in the ocean floor, the men working on the foundation discovered an enormous cavern in the bedrock. Sinclair saw the possibilities in such a discovery and purchased the rights to the space, which no one else wanted. He then paid off the few people who knew to forget that the cave had ever been found. Through further exploration, Sinclair discovered that the cave system extended out into a cliff at the edge of an oceanic trench.[3]

It was here that Sinclair later built Persephone, the headquarters of his business empire, Sinclair Solutions. The Persephone Penal Colony, the Persephone Correctional Facility and the Persephone Detention Facility were built here. When Andrew Ryan and the City Council imprisoned people considered a danger to Rapture, they were held in Persephone by Sinclair. Many were removed from public record.[4] To make Persephone pay for itself, Sinclair rented out inmates for Plasmid testing at Fontaine Futuristics and later Ryan Industries. They became test subjects for Plasmids and Gene Tonics, and later for the creation of the first Alpha Series.[5] Sinclair allowed Inmates the option to purchase special treatment and more comfortable accommodations. Advertisements for comfier beds and products of "Fail-Safe Industries" on the prison walls, enticed inmates to purchase "premium accommodations available from your Sinclair Solutions Catalog."

Over the years, Sinclair's businesses expanded into a wide variety of markets. He was especially proficient at profiting by giving work to poor residents of Pauper's Drop. Sinclair Toys produced inexpensive toys using cheap labor, which were sold to shop owners such as Silas Bantam in Ryan Amusements. Sinclair would sell a box of unassembled syringe parts to down-and-out residents in the Drop, like Elliot Nelson, have them assemble the syringes, and buy back the finished product at twice the price. Nelson believed that Sinclair was a fool.[6] Sinclair then sold the syringes on to Ryan Industries to make the profit.[7] Sinclair also built and owned The Sinclair Deluxe, an "affordable" tenement hotel in Pauper's Drop, literally under the tracks of the Atlantic Express.[8] Sinclair gave his tenants a discount at his chain of liquor stores, Sinclair Spirits, thus gaining their regular custom over his competitors.[9]

Personally, Andrew Ryan despised Sinclair for his business strategies, but they remained close business associates.[10] Ryan used Sinclair as a go-to problem solver for issues with dissidents. When Sofia Lamb's influence over her patients became a problem, Ryan hired Sinclair to find a reason for her to be imprisoned.[11] To accomplish this, Sinclair hired a Rapture Tribune reporter, Stanley Poole, whom he was paying to not publish anything negative about him, as a spy to infiltrate The Rapture Family.[12] Poole eventually gathered enough evidence to convict, and Lamb was taken to Persephone, where Sinclair employed her psychiatric expertise to make inmates more docile. This eventually backfired on him. Lamb became influential enough with the inmates that she sparked a rebellion, ousting Sinclair from the facility and taking complete control of Persephone.[13]

Outside of Persephone the civil unrest intensified, leading up to the Rapture Civil War. During this time Sinclair was involved in the creation of the Vita-Chamber, as evidenced in Yi Suchong's Audio Diary of the same name. Working for Ryan Industries, Sinclair profited from the confrontation between Andrew Ryan and Atlas by conducting a "Consumer Rewards Testing Program"[10] of Plasmid field clinical trials. Citizens had a chance to test home defense products, such as the Aero Dash and Geyser Trap Plasmids. Sinclair even hired convicted criminals to test his products, such as Louie McGraff from Persephone, offering the promise of release.[14] Sinclair was indifferent to which side the combatants supported, saying that was their own business as long as they tested his products.

After Lamb assumed control of Rapture, Sinclair stayed alive, and eventually hid himself in Ryan Amusements. He became a valuable ally to Brigid Tenenbaum. He planned to use her allegiance to help him reach his lifeboat in Persephone and escape to the surface along with several of Rapture's technologies that would ensure his financial success there.

As one of Rapture's more shrewd and cunning business men, Sinclair was able to build or buy many businesses.

Sinclair is introduced to Subject Delta over the radio after Tenenbaum leaves him in the Atlantic Express workshops. Sinclair is hiding in Ryan Amusements, and he asks Delta to take the train to the theme park in order to clear out the wall of ice that blocks his further progress to Persephone. Within Ryan Amusements, he guides Delta through the process of adopting Little Sisters and gaining the Incinerate! Plasmid. He then joins Delta on the train after the ice has been melted.

During their journey together, Sinclair gives Delta many tips that help him to overcome obstacles or understand parts of Rapture's history. Sinclair seems to trust Delta as a worthy partner and claims that he will take Delta with him to the surface. He doesn't try to hide his moral biases, and he often advises Delta to make choices for the greatest personal benefit, such as harvest Little Sisters. However, he never second guesses Delta's actions, recognizing that the choice is ultimately up to him.

In Siren Alley, Sinclair shows outright trust towards Delta, when Simon Wales destroys their train with a torpedo, leaving Sinclair trapped in Dionysus Park with finite air reserves, where he is reliant on Delta to drain the park and save him. Although he is close to running out of air, he still advises Delta to be ready before draining the park and saving him.

When Delta and Sinclair finally reach Persephone, Sinclair loses radio contact with Delta and disappears for some time. When Delta is trapped by Sofia Lamb, and forced to control a Little Sister in order to escape, Lamb orders The Rapture Family to cease all activities until Sinclair is found. When Delta and Eleanor Lamb finally escape together, they discover that Lamb has sealed all bulkheads in Persephone, and has given the key to Sinclair, whom she had captured and turned into the last of the Alpha Series, Subject Omega (Symbol: Ω), as a psychological assault on Delta.

However, Sinclair retains his intelligence and his voice since Lamb left his larynx unaltered in order to force the bomb codes out of him. Although his actions are controlled by Lamb and against his free will, he can still speak and think for himself. With little of his human self left, that small remainder wanted to be free from his changed state, and so he does his best to help Delta. Sinclair locks himself inside the prison watch tower, forcing Delta to sneak his way in, or learn the code.

Sinclair radios Delta, telling him not to blame himself for ending his life. Sinclair justifies this by saying that he has accepted his death on the terms that Delta will "Stick it to Lamb and let young Eleanor see the sun." With Sinclair's help, Delta finally manages to confront him in the room, and after a battle, he kills Sinclair. With his last words, Sinclair thanks Delta for ending his warped existence. If Delta is a harvester, Eleanor will be indifferent to Sinclair's death, but if he is a savior, she will feel sympathy for Delta, and tell him to be ready before taking the key.

Augustus Sinclair/Subject Omega has roughly 2.5x the health of an average Alpha Series,[16] roughly as much health as the Bouncer or Rosie Big Daddies encountered early in the game. He is also equipped with a Launcher and a hacked Security Bot. However, Sinclair retains the Alpha Series' vulnerability to headshots and is therefore noticeably easier to terminate. The room he locks himself in also has many different access points, traps, and hazards to allow the player to catch him off guard.

The player can drive Sinclair out of the room he's locked in by crawling through the vent and lighting up the oil puddle with Incinerate! Deploying a Turret inside the room will also open the door automatically.

It is possible to Hypnotize Sinclair by charging up to level three. Unfortunately, he cannot be persuaded to give up his key, but will have green eyes, follow the player, and fight nearby enemies. If the player sticks several Proximity Mines to Sinclair while he's hypnotized, they'll either kill or badly weaken him. While in this state it is recommended to fire several Spears, both Standard and Rocket, into his head. If in the middle of a battle, this Plasmid can also be used to pause the encounter, giving the player time to reload and restock on ammunition.

One of the fastest and most effective ways of dealing with Sinclair is to use the Summon Eleanor Plasmid. Eleanor will do basically all the work, and one can speed up the process by shooting Sinclair with a powerful weapon such as the Machine Gun or Launcher. Freezing Sinclair with Winter Blast and firing a Heat-Seeking Rocket will also shatter and kill him almost instantly (Like all major enemies and bosses, Sinclair does not shatter from the effects of Winter Blast).

More effective still, the player can choose to plant around half a dozen proximity mines next to the door of the security office before entering the door code and retreating, which will kill or severely damage Sinclair the moment he emerges.

The Security Bot in Sinclair's room is deactivated and can be hacked by crawling through the maintenance tunnel. It will immediately attack Sinclair, forcing him out of the room. He will then run into an adjacent area where a Turret is located; if this Turret has itself been hacked, the one-two punch of both machines can result in Sinclair being killed very rapidly, without Delta (or Eleanor) needing to do anything.

The following are phrases that Augustus Sinclair says in BioShock 2. The name of the source audio file is listed when known.[Audio files needed] 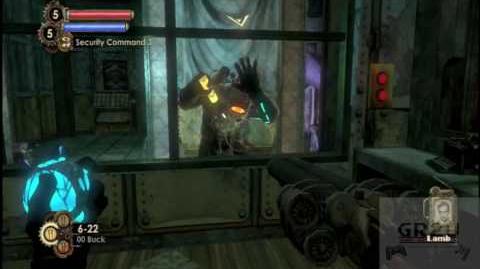 Sinclair as an Alpha Series. 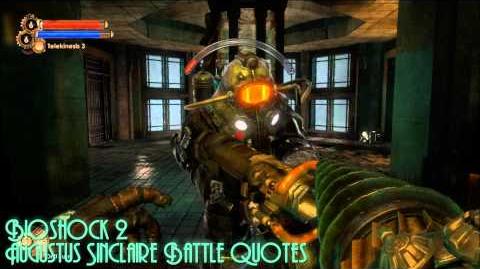 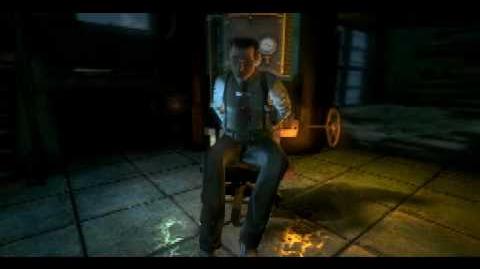 A video of Sinclair held captive which was never used in the game. 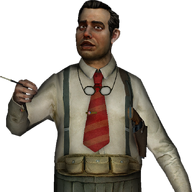 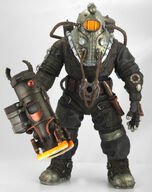 The real-world figurine of Subject Omega, by NECA.