There are a few references to her in BioShock 2. Her name is mentioned on posters for the two movies The Black Dream starring Sander Cohen, and Health Hazards of the Sun.

A quote from Ava can be seen during the game's loading screen. The quote suggests that Ava was, like many of Rapture's citizens, an ADAM user.

“It's no wonder Cohen closed the Fort, darlings. Theater is dead…Why play the voyeur when ADAM can make you a star?”
― Ava Tate[src]

An advertisement for Tate's film: "The Black Dream". 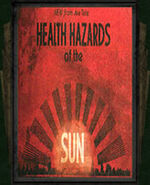 An advertisement for Tate's film: "Health Hazards of the Sun".