The Splicer model Baby Jane came to Rapture to be in show business, and can be heard lamenting that her looks have been ruined. A failed theater actress, Baby Jane still believes herself to be a star despite the societal collapse around her, of which she seems mostly oblivious.

In BioShock 2 Baby Jane has resorted to prostitution to get by, as indicated by her dialogue, and still laments her loss of beauty and fall from the spotlight.

The following are phrases that the Baby Jane Splicers will say in BioShock. The name of the source audio file is listed, when known.

The following are phrases that the Baby Jane Splicers will say in BioShock 2. The name of the source audio file is listed, when known.

Baby Jane wears a long sleeve off-the-shoulder cocktail dress, the type worn by a model, actress, cocktail waitress, or stage performer. She has a short, black, shingle bob haircut similar to the 1920's flapper style[7]. Splicing and the Civil War have damaged her appearance and mental state. The full, pleated skirt portion of her dress has been torn up to the thigh region exposing her undergarments and garters. She wears one torn stocking on her left leg, and no footwear. She has razor marks across her face, neck, legs, and sternum from extensive cosmetic surgeries and the war. Baby Jane can wear a red fabric flower brooch as an accessory.

Model 1: This model wears a vibrant jade-green-and-black patterned dress. She has smeared lipstick and eyeliner over pancake-style makeup and is blind in her right eye.

Model 2: This model wears a white dress that has dark green trim on the cuffs and collar. Her dress and body are splattered in blood and is blind in her right eye. She seems to be suffering from vitiligo.

Model 3: This model wears a green dress that has dark green trim on the cuffs and collar. Her dress is so covered in blood that it almost looks red.

Model 4: This model wears a dull green dress with lighter green speckles on the upper part. While the other Baby Janes have blue eyes, she has brown eyes and exposed wounds all over her entire body.

Baby Jane has changed her appearance drastically over the years. Her quest for a beautiful smile lead to repeated surgery and splicing which have destroyed her lips and caused her to lose several teeth. In BioShock 2, Baby Jane wears a form-fitting party dress over a slip, timeworn stocking, and a single high heel shoe with a small poof on the front. Her jewelry consists of a pendant necklace with a stone, a trio of rings, and a plate bracelet on her left forearm. Her hair is worn in a short finger wave style with spit curl sideburns. Baby Jane has survived in Rapture for 8 years since we last saw her, and thanks to splicing, her appearance has become all the more deformed. Her dress is torn high up above her kneecaps, a slit-like rip above the left knee reveals her lingerie, and the strap over her right shoulder hangs loosely around her arm. Baby Jane is terribly emmaciated; her skin is stretched over her ribs and wrist bone. Her slight figure is either the result of trying to appear thin or from a lack of available food in Rapture. She has developed several large, bulging tumors on her left shoulder and on her legs. She can wear a sunflower, a pair of orange sunglasses, or a red bow attached to a headband as an accessory.

Model 1: This model wears a chartreuse dress with a white slip with a light blue pattern. She has a black shoe with a light brown poof and black stockings. Her necklace has a blue stone and her bracelet appears to be dark brown. She has strawberry-blonde hair and her eyeliner is running around her eyes. Her skin has suffered major damage, and her left arm is completely red.

Model 2: This model wears a white dress with a cream colored slip. Her shoe and stocking are also white. Her necklace has a red stone and her bracelet is silver. Her hair is black and she appears to be a woman of color. She seems to have a minor case of vitiligo as well as some age spots on her chest. She has slivery varicose veins around her left arm.

Model 3: This model wears a red brocade dress with black straps, slip, and belt. She has a dark red shoe and is the only model with two visible stockings on her legs; the pair are in a dark, pinstripe pattern. Her necklace has a green stone and her bracelet is light brown. Her hair is a sandy blonde and her eyes are green. The tumors on her shoulder are highly inflamed and she has red varicose veins around her sternum.

Model 4:  This model wears a black dress with a light brown slip. She wears a white shoe with grey stockings. Her necklace has a black stone and her bracelet is grey with black edges. She has dark brown hair and her skin is in pretty good condition and much cleaner, compared to the other models, with no other major cuts or injuries. This is the model used by all female Prisoners in Inner Persephone. 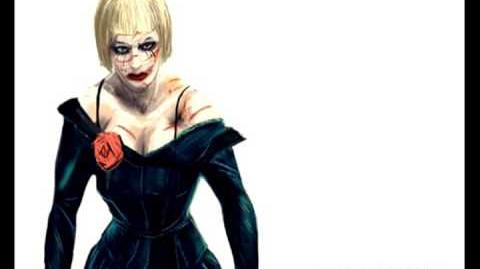 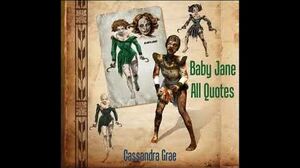 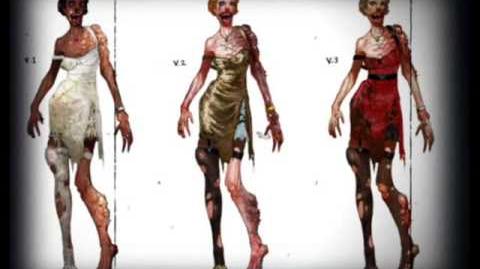 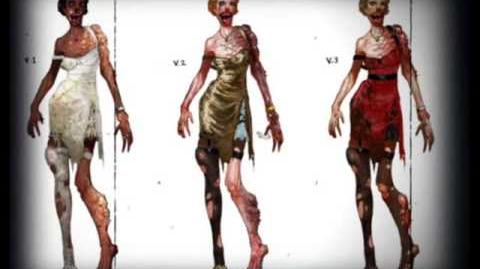 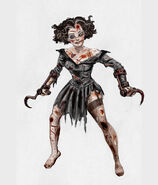 Concept for Baby Jane as a Spider Splicer.

A near finished concept for Baby Jane.

The finished concept for Baby Jane.

A Baby Jane in the form of a Spider Splicer.

A Baby Jane as a Spider Splicer on the ceiling.

A Baby Jane as seen in BioShock 2.

A close up of Baby Jane's face in BioShock 2.

A Baby Jane conversing with other splicers in BioShock 2.