Back to the Frozen Triangle 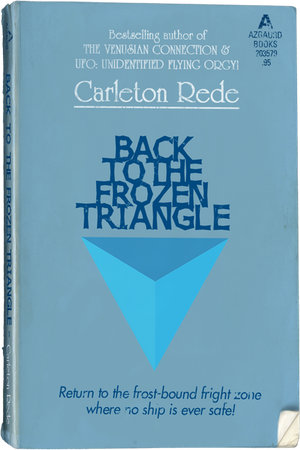 “Return to the frost-bound fright zone where no ship is ever safe!”
― cover of Back To The Frozen Triangle, by Carleton Rede[src]

Back to the Frozen Triangle is a book written by Carleton Rede which explores the same subject matter as his previous book, The Frozen Triangle. Carleton Rede has admitted that much of the subject matter for this book was acquired from his contact, the Red Pawn, during his membership in the International Order of the Pawns. The first edition of the book was published in 1969.

This book was important to Mark Meltzer during his voyage to find his daughter, Cindy, in Rapture. Return to the Frozen Triangle contained information about a "Phantom Light House" and an English Trawler's encounter with it. This was a vital clue for Mark to complete the fourth level of the Metal Box Puzzle, and it also gave him a hint about the entrance of Rapture.

In the long, dark winter nights of Iceland, there's
not much to do besides dance and drink. And strong drink
it is! The nation's unofficial beverage is a schanpps-like
concoction known as "Black Death." A volatile and heady
brew (75 proof), it washes down the fermented shark's
meat called hákurl -- one strong taste masking the other.
With stuff swirling in the stomachs of these Viking
descendants, it's no wonder that the wild, old legends seem
very much alive.
The land is filled with tales of the elves, better known
as the huldufólk or "hidden folk." The government has
been known to re-route highways so as to not disturb the
ancient haunts of these mythic creatures. Every year, Ice-
landic children greet Christmas Day not with dreams of
sugarplums but with nightmares of the Jólkötturinn, the
enormous "Yule Cat", which devours anyone who does
not receive new clothes to wear on Christmas Day.
But it's the seamen, in their salt-scented bars, who
harbour the darkest legends of them all - brought back
from the brink of death on icy seas. For the Icelandic
sailors, ghost stories are a kind of sport. To hear their tales,
one would think the waters between Greenland and
Iceland are more densely populated by ghosts than fish!
Of all the tales they weave, there is one to which they
inevitably return: the eerie tale of the grimmest harbinger of
death in these strangely haunted waters.

Somewhere, in the North Atlantic, far from any land,
there lies a lighthouse. Some claim it's a ghost structure,
built of ectoplasmic bricks and that glimmering light at
its peak is fueled by the fires of Hell! They call this baleful
black beacon the Phantom Lighthouse. Lord help the lost
ship that wanders into these waters unaware -- for suddenly,
compasses spin awry and radios fill with static. Then the
Phantom Lighthouse looms suddenly in the mist.
To set eyes upon it (so it's said) is to meet most certain
death. The waters around the black tower are awash with
the splinters of broken boats. the air around it echoes
with the shrieks of dying sailors and the keening wails of
unholy, misshapen creatures that feed on human flesh.
It sounds like another old and lurid legend -- but the
tale is of recent vintage. Folklorists have found no trace of
its telling before the end of World War II!
All the superstitious sailors claim to have heard the
story from the friend of a friend who was dashed upon the
rocks. but few can name the friend -- and none can
answer the obvious question. For if no one can survive an
encounter with the Phantom Lighthouse -- who was left to
tell the tale?
Ask this, and all the garrulous old salts squint contem-
platively and fall to silence, slicing off another piece of
slatur sausage as they return to their steep mugs of beer.
Despite the Icelandic trademark on the tale, the only
survivors who claim to have seen the spectral lighthouse
are, surprisingly, Englishmen-- lost in these icy waters
due to international brinksmanship that nearly erupted
into war!