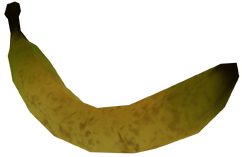 Bananas are tasty and nutritious fruits in BioShock Infinite that restore a small amount of health when consumed.

Bananas are found in abundance around Columbia, but can also be found in lootable containers and on the bodies of defeated enemies. Rotten bananas deplete a small amount of health when consumed and look very similar to their fresh counterparts.

Their presence in the game actually shows off Columbia's progress in science. In reality, there were hundreds of attempts to produce bananas in useful quantities in the United States around the time of the game. All of them failed, and much of the US' foreign policy was aimed at securing countries that produced the fruit, also known as "Banana Republics."

Retrieved from "https://bioshock.fandom.com/wiki/Banana?oldid=308531"
Community content is available under CC-BY-SA unless otherwise noted.