The Bank of the Prophet is located in the Financial District in Downtown Emporia and is the largest and most often used bank in Columbia. While the foyer is open to peruse, Booker and Elizabeth will not be able to access the elevator until they have attempted to enter the Comstock House Gate in Victory Square and explored the Memorial Gardens.

The Bank of the Prophet was established in 1894 as a place for citizens to deposit their savings, establish credit, and receive loans. The central financial institution of Columbia, it was a symbol of the floating city's economic independence and stability. It was also Zachary Comstock's biggest racket, as fifty percent of all transactions processed in the city went directly to him as a tithe.[1]

Because of this, the Bank of the Prophet was an especially meaningful target for the rage of the Vox Populi when they rose up against The Founders and seized Emporia.

By the time of BioShock Infinite, when Booker DeWitt and Elizabeth reach the bank, much of the inside is dark and dreary.

The bank itself consists of the foyer, some administrative offices, and the vault. The foyer is largely free of debris with three Kinetoscopes detailing the "Rise of Columbia" against the wall. The elevator is initially locked and barred.

Upon returning from the Memorial Gardens, the stairs are suspiciously covered in crows, a warning of the two Zealots of the Lady, a Fireman, and a bunch of Vox Populi that will burst out from the doors. Several policemen are seen to have been executed in the lobby. Courtesy of the now broken elevator grates, Booker and Elizabeth can enter the lower bank vaults to find one of the secrets of Lady Comstock.

Down in the vault, Booker will have to battle his way through numerous enemies before reaching his objective in the vault: a Tear, one of three to show the truth to the ghost of Lady Comstock. Upon reaching and opening that Tear, a Voxophone is left behind. The Siren breaks open the vault door and Booker will once again have to battle his way through Lady Comstock and her undead minions.

When Booker enters the atrium and heads down the left path, he comes across a room with a Vox Cipher, which requires a Code Book to interpret. Once the code book is recovered from Hudson's Fine Clothing, Booker enters the code to unlock a secret storage area containing an Infusion, a Voxophone, a Burstgun, a Locksmith Bag, a Cash Bag, and a silver and Gold Bar. 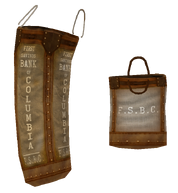 A Zealot hovers over his victim in the vaults.

A Zealot stands before the Tear.

One of the Vox Ciphers.

The Siren raising the dead in the bank atrium.

Bank of the Prophet
Protects Your Dynasty

Bank of the Prophet
Protects Your Family's Future

Retrieved from "https://bioshock.fandom.com/wiki/Bank_of_the_Prophet?oldid=322484"
Community content is available under CC-BY-SA unless otherwise noted.