“I'm not trying to 'keep up with the Joneses' here, I'm trying to stop them from killing us! I mean, I love Fred, I do, but if he won't wear the pants around here, I'll just have to pull them up over my pantyhose!”
― Barbara Johnson[src]

Barbara Johnson (often referred to as the Housewife) is one of the selectable characters in BioShock 2 Multiplayer. She was the second character to be shown on the Cult of Rapture's Faces of Rapture's Civil War.

"Barbara Johnson is a dutiful housewife and an attentive mother. She arrived in Rapture hoping that the unique and exciting circumstances of life under the sea would dispel the sense of dissatisfaction that plagued her topside. And at first it did. But as the novelty of her new environment wore off, and her household duties again demanded her full attention, she found herself once again beset by the familiar and nagging sense that there must be something more."

Barbara's husband, Fred, forbade her from splicing in front of the children, despite her warnings that the neighbors were trying to kill them. After her daughter, Susie, is nearly attacked by a Big Daddy as she was trying to play with a Little Sister, Barbara goes against her husband's wishes and heads to the store to buy some more "Special Medicine." However, as ADAM became harder to find, Barbara becomes so desperate to acquire some that she lets several strange men claiming they've got ADAM into her apartment. They immediately kidnap Susie, and despite successfully shocking one of the men, another strikes Barbara with Winter Blast, freezing her as they take her daughter away. However, she knows that they are taking her to the Little Sister's Orphanage and states that she will march down there and find her daughter and then the men who kidnapped her.

As Barbara splices more and more, she begins losing her grip on reality, believing the war zone to be her household. For example, she becomes deluded into thinking an enemy Big Daddy is the family dog (as she remarked before Splicing that the Big Daddies smelled like wet dogs[1]) and that the Little Sister and the Splicers she researches are, in fact, her own child.

The following is a list of phrases that Barbara Johnson will say during multiplayer games. The name of the source audio file is listed, when known.

Picked up a Little SisterEdit

Putting Little Sister into a VentEdit

Barbara Johnson is the picture of the everyday housewife of the 1950s. Her outfit consists of an hourglass-shaped, blue knee-length shirt dress with a notched collar, a white, polka-dotted pinafore apron, a pair of stockings, and black high heels. Her jewelry is conservative yet elegant and includes a pearl necklace, pearl earrings, and her diamond wedding ring. Her medium-length, dark brown hair is worn up in curls, she has blue/grey eyes, and wears red lipstick. She's grabbed a cast iron frying pan from the kitchen which can be used as her personal melee weapon.

Like most citizens of Rapture, Barbara's appearance has drastically changed due to her addiction to ADAM. The blue dress and apron, once immaculate in appearance, has been torn on several parts and are discolored with minor burn marks and dirt. While fighting Spliced-up citizens in the Home Consumer Rewards Program, she has lost her heels, stockings, earrings, and necklace, but her wedding ring is still intact. Her entire face appears to be swollen, with a large cut and a bruise on her forehead and another scar on right cheek. Her teeth are in terrible condition, and it appears as if her nose has been broken and healed at an odd angle. The hairline on the middle of her head is giving way and she is prematurely balding. A patch of hives can be seen on her left leg. 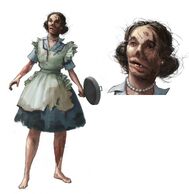 Another concept variation, with torn off skin reviling flesh instead of deformities. 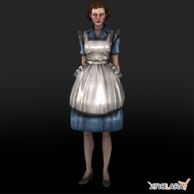 Render of Barbara before splicing.

Barbara seen in the Kashmir Restaurant Section on The Official BioShock 2 page.

Close up of Barbara's face after splicing.

Barbara seen in the Winter Blast training video for BioShock 2 Multiplayer.
Add an image to this gallery

Retrieved from "https://bioshock.fandom.com/wiki/Barbara_Johnson?oldid=305272"
Community content is available under CC-BY-SA unless otherwise noted.