The bathyspheres of Rapture are small submersibles, allowing travel to, from and within the city. They are part of the city's transportation network, the Rapture Metro, created by Anton Kinkaide. The public submersibles were built by Austen Bathysphere Co. while their control systems were built and designed by Fontaine Futuristics. An article seen in an old copy of the Rapture Tribune reveals that a new line of bathyspheres was set to launch in 1960 for the public network, however, production of this new model was halted once Rapture's economy fell. The common model of Bathysphere seen in Rapture is round and has three decorative fish mouths above the door.

After Rapture society fell into civil war, Andrew Ryan prohibited the use of bathyspheres to anyone outside of his inner circle and supporters. Citizens started protests at the Bathysphere Station that linked Rapture to the surface, and demanded to be allowed out, though their demands were never met.

Throughout BioShock, the bathyspheres are used by Jack as a mode of transportation around Rapture. It is revealed that Jack can use the bathyspheres only because his genetic signature is close enough to Ryan's that the security system doesn't deny him access. Security Chief Sullivan clearly states in one of his audio diaries that, because of the unreliability of the bathysphere locks, "Sisters, cousins — anyone in the ballpark, genetically, will be able to come and go as they see fit." Sander Cohen can also make use of the bathyspheres, being part of Andrew Ryan's inner circle, which explains how he reached his apartment at the Mercury Suites in Olympus Heights later on in the game if he was left alive in Fort Frolic.

In BioShock 2, Prentice Mill recounted in one of his audio diaries that private bathyspheres became increasingly popular as the city expanded. Advertisements from Austen Bathysphere Co. can be seen scattered throughout parts of Rapture exemplifying their private line of bathyspheres. However, by 1968 bathysphere travel from one location to another has been replaced by the use of the older and derelict Atlantic Express transport system which runs on overhead rails. A cut public address announcement directs citizens to this system as a remaining way of travel around the city. Although the genetic lockdown has been lifted after Andrew Ryan's death, Sofia Lamb kept torpedoes targeting any unauthorized bathysphere travel in order to maintain Rapture's secrecy.

In BioShock 2's downloadable content, Minerva's Den, Brigid Tenenbaum and Subject Sigma use Charles Milton Porter's private bathysphere docked in his office at The Thinker's core to escape from Minerva's Den and Rapture. They are able to bypass Lamb's torpedoes grid with a signal beacon recovered from a sunken bathysphere that had been reprogrammed at the Operations wing of Rapture Central Computing.

In BioShock 2 Multiplayer, set during the civil war, participants of the Sinclair Solutions Home Consumer Reward Program are provided with access to their own private bathysphere at their apartment to travel freely around Rapture. In terms of gameplay, the bathysphere provides players game matches and their settings. During loading screens the inside of the Bathysphere can be seen shaking as it brings the player to their next match.

Naledi Atkins mentions her love of the bathysphere systems to the point that she had modified and personalized her own personal bathysphere.

In BioShock Infinite, after going through a Tear to escape Songbird and finding themselves in Rapture, Booker DeWitt and Elizabeth use a bathysphere at the Welcome Center to reach the surface and access the Lighthouse. 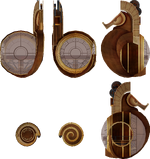 In BioShock Infinite's downloadable content, Burial at Sea - Episode 1, set on the eve of the civil war, Booker and Elizabeth are both sent by Sander Cohen via bathysphere to Fontaine's Department Store, a mall complex sunken to imprison Frank Fontaine's followers. While heading towards the isolated department store, a number of other bathyspheres can be seen traveling throughout the city. They dock at Fontaine's Station. Compared to the standard model, this one only has one decorative fish mouth above the door.

Later, while traveling from the Pavilion via Pavilion Station to the Housewares building, the pair takes one of the seahorse-shaped tram vehicles which are also round, but are affixed to an overhead rail.

Bathyspheres DeLuxe, a store in Fontaine's Housewares building, sold private Bathyspheres to those who could afford it. These 'spheres were designed to suit the different lifestyles of Rapture's populace. The bright colors and steamline designs of these Bathyspheres resembled those of the high speed cars of the 1950's.

When compared to the more utilitarian bathyspheres used for the public Rapture Metro system, the private bathyspheres had some significant design flaws. Each Bathysphere has a CO₂ Scrubber to prevent carbon dioxide intoxication, but some of the scrubbers used by the commercial vehicles could be unreliable. Also, the newer model Bathyspheres had a dangerous design flaw and tended to overheat. Rather than face the cost of repairs and the scandal of a recall, the company supplied a free sample of the Plasmid Old Man Winter to customers. Unlike the bathyspheres used for the public Metro system, these private bathyspheres could be manually driven and provided built-in shelves or units for ample storage. 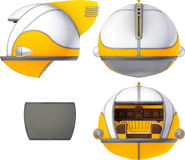 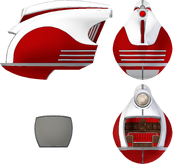 Concept art and model for the Bathysphere. 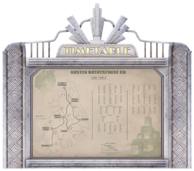 A map of Rapture's bathysphere system. 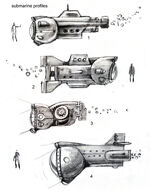 Concept art for a submarine design for BioShock 2 #1. 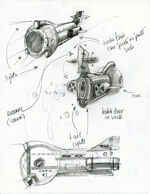 Concept art for a submarine design for BioShock 2 #2.

An old advertisement for Austin Streamliners in BioShock 2.

The Rapture Metro Bathysphere design in Burial at Sea.

A whale swims by as Jack's bathysphere enters Rapture.

A close up of the telemotor (note the Fontaine Corp. logo).

Elizabeth sitting in the Bathysphere.

'49 Humpback Whale and '52 Mako under maintenance at the Service Bay.