“Take a deep breath and step out of the Bathysphere. I won't leave you twisting in the wind.”
― Atlas[src]

The Bathysphere Station serves as the primary ingress point into Rapture. Bathyspheres from the Lighthouse ferry new arrivals to the Welcome Center complex from this point. Several important elements of BioShock take place here.

Every new citizen of Rapture entered through the Bathysphere Station here. The station is different from most others in Rapture as it was equipped with two bathysphere docking bays to handle the large influx of immigrants, while still operating normal local bathysphere travel. Just beyond the station is a comfortable Lounge for anyone waiting for the next vehicle's arrival. The Lounge is connected by tunnels to several different points of Rapture's Welcome Center complex.

As the Civil War escalated, life became more difficult in Rapture. Andrew Ryan instituted a lockdown on all bathysphere travel. The covers over both of the bathysphere docking bays were lowered and travel was suspended at the station for unauthorized people. Naturally, this decision was not met favorably and the Bathysphere Station was the site of protests of people demanding to return to the surface.

The station and lounge fell into disuse afterwards. Like most of Rapture, both areas suffered serious damage from the Civil War. At some point, a lone Thuggish Splicer took up residence in the lounge.

After descending in a bathysphere from the Lighthouse, Jack arrives in the Bathysphere Station. Before he can begin to appreciate Rapture, he has his first encounter with the populace. While still inside the bathysphere, Jack witnesses the Splicer Rose corner and eviscerate Atlas' henchman Johnny. Upon noticing the newly arrived vessel, the crazed woman jumps atop the bathysphere and starts cutting into it in an attempt to get at its occupant. She gives up, after damaging the vehicle. Atlas, via a shortwave service radio, introduces himself and instructs Jack on how to proceed.

The station is very dark, with much of the lighting having failed some time previous. Abandoned suitcases and protest signs lie scattered around the place, a sad reminder of those who desperately wanted to leave the dying city. It appears the protests that took place at the station turned violent, as the connecting bridge to the second Bathysphere dock is destroyed, and a pillar has collapsed near the exit, which is now blocked by rubble. Somewhere in the rafters, Rose can be heard humming If I Didn't Care by The Ink Spots. After some Security Bots scare her off, Jack acquires the wrench.

Jack continues on to the Lounge and deals with the splicer living there, who makes his presence known by kicking a flaming couch down after Jack. Unlike the station, the Lounge is well lit, with all the lights focusing on advertisements for the latest Plasmid. Part of the ceiling has collapsed, blocking the left staircase up to the balcony and causing a small fire. Jack gains the Electro Bolt Plasmid, and it sends him reeling. In a semi-conscious state, he has a brief encounter with some Splicers and a Little Sister and her Big Daddy. With the power of lightning in his hand, Jack then can easily open the jammed bulkhead and take the tunnel on into the rest of Rapture.

Destroying the Siphon releases a massive surge of energy which imbues Elizabeth with total control over her powers. The blast also destroys the Whistler, meaning Booker DeWitt can no longer control Songbird and it is free to attack. However, just before the monstrous bird can reach them, Elizabeth transports the three of them to the lounge area of the Bathysphere Station in Rapture. Elizabeth says an emotional goodbye as the Songbird, on the other side of the window, is crushed by the enormous ocean pressure. Afterwards, Booker questions Elizabeth about this new, strange location, and she explains that it's "a doorway". The two then proceed down to the bathysphere station and board a bathysphere up to the Lighthouse.

The station and lounge in the reality that Booker and Elizabeth enter is purposefully different from the one in BioShock. Though largely similar, certain elements and details from the two locations are different, added, or missing, and the two games should not be considered as taking place in the same reality. The most noticeable difference is the glass tunnel that connects the station to the rest of Rapture. Here, part of it is gone, likely ripped away by the tail section of Apollo Air Flight DF-0301, and the remaining part is intersected by a new tunnel not present in the first game, in which a Little Sister mourns over her fallen Big Daddy.

A paintover of the Lounge, made by Jeff Zugale for BioShock: The Collection.

Ryan Doesn't Own Us.

We're Not Your Property! 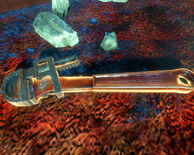 Only one way to go.

The lounge area of the Bathysphere Station building as seen from outside.

Ryan Doesn't Own Us.

Elizabeth awaiting departure in the Bathysphere.