For the kinetoscope with the same name, see Battleship Bay (Kinetoscope).

Battleship Bay is a popular beach area of the Soldier's Field district of Columbia, seen in BioShock Infinite. The Bay is home to shops, an arcade, live music, and an expansive beach. It features real sand as well as what appears to be a simulated ocean. Seagulls are seen hanging around the beach. Booker DeWitt and Elizabeth fall into the bay after escaping Monument Island, and get their first glimpse of the First Lady's Aerodrome in an advertisement on the beach. The mechanisms which maintain the ocean can be found inside two different maintenance rooms in the area.

As Booker and Elizabeth escape from Monument Island, they fall from a collapsing Sky-Line into Battleship Bay. After being pulled from the water by Elizabeth and recovering his strength, Booker sees an advertisement for The First Lady airship, and decides to hijack it to leave Columbia. While tickets are requested for the First Lady Aerodrome, they are attacked by Founders attempting to detain Elizabeth. Booker eliminates the group and makes his way to Soldier's Field with Elizabeth.

Battleship Bay is a man-made beach located near the base of Monument Island. It comprises a small, artificial bay supplied by pumps and rain-catchers[1] and a sandy shore. The beach features simple attractions, such as "Dancing at Dusk" on a small pier, boating, surfing, various food stalls and a gift shop. The Upper Boardwalk features curio shops, food carts, and a view of the beach.

The arcade is a colorful area filled with theater machines, featuring various installments of the Dimwit & Duke series. It also features the game's first Motorized Patriot, on display in a glass case. 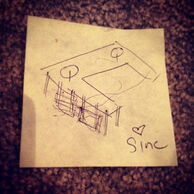 Image from BioShock Infinite Artbook, showing most likely a fragment of Battleship Bay.

Concept art and models for the boardwalk, by Laura Zimmermann.

Spacing test for the bay area.

Storyboards for an early version of the Battleship bay sequence, by Cesar E. Lemus.

Elizabeth at the waters' edge.

Fun in the sun.

A bodybuilder posing in front of the turnstiles.

The machinery that makes waves.

Elizabeth and some citizens in Battleship Bay looking at the destroyed Angel statue.

The Bay as seen from a Kinetoscope.

An overhead view of the gondola connecting Battleship Bay to Soldier's Field.

Two gentlemen on a smoke break.