“A good worker ALWAYS has his eyes on the task at hand.”
― Fink Propaganda[src]

Beggar's Wharf is a large port located at the Finkton Docks in Columbia. It is adorned with a large color image of Jeremiah Fink and projectors displaying Fink propaganda. It is used as a cargo depot and a warehouse.

After being kicked out of The First Lady by Daisy Fitzroy and the Vox Populi, Booker DeWitt finds himself at Beggar's Wharf with two priorities: find Elizabeth, who has run off on her own, and get guns for the Vox.

The area is tightly controlled as employees go about their job. Lower class workers perform repetitive menial labor (such as assembling crates and scrubbing floors, vending machines, and crafts) in an automated fashion to the beat of a plodding musical score played over the public address system. Menacing foremen oversee their work while clerks go over figures on their clipboards. Police officers march up and down the docks. All the while, Jeremiah Fink's elitist propaganda plays over the loudspeaker accompanied by images projected via Mosquitoes.

There's a Veni! Vidi! Vigor! machine in the Delivery Center. A lockpick is in the "Cargo Lift to Sky-Line" hangar, another one is under the stairway leading up to it, and another is on the other side of a large pipe at the far end of the wharf. Further along the dock, there are a couple opportunities to get into a fight with the local force if Booker steps on one of the barges or takes the Silver Eagles and silver bar from the safe in the building marked "Employees Only."

Further on, Booker passes a series of containers that fell from a cargo barge. He pries open the doors to the warehouse just in time to see Elizabeth being thrown off a barge. He chases after her, but she opens a series of harmless Tears which impede his pursuit. She runs into Fort Franklin.

Concept art for the Finkton Docks by Ben Lo. 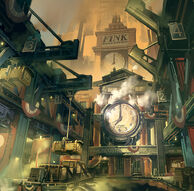 Another view of the wharf.

Two clerks busy working in an office on Beggar's Wharf.

An overhead view of Beggar's Wharf.

A group of workers at Beggar's Wharf in synchronization with the music.

Battle on the wharf!

The inside of the security office at Beggar's Wharf.

An overview view of Pier 21.

Elizabeth on the run from Booker.

A marching band gets in Booker's way as he follows Elizabeth.

The path Booker takes to Fort Franklin to catch up with Elizabeth.
Add an image to this gallery
Retrieved from "https://bioshock.fandom.com/wiki/Beggar%27s_Wharf?oldid=321983"
Community content is available under CC-BY-SA unless otherwise noted.