BioShock: Breaking the Mold is the official artbook of BioShock, which was released on August 13, 2007, by 2K Games as a free downloadable PDF book. It contains concept arts from the creation of the game in both low and high resolutions.[1]

The artbook includes a foreword written by BioShock's director Ken Levine, which lists the graphic artists who were influential in the design of the game. Concept art shows the creative progression of the design for the game logo, the iconic enemies, the weapons, and the locations of BioShock.

Until October 1, 2007, 2K Games sent a rare printed version of the artbook to the owners of the BioShock Limited Collector’s Edition whose Big Daddy figurines had been broken, as compensation for the time it took to replace them.[2]

In May 2009, 2K released a greatly expanded, print-only version of the artbook, with the added "Developer's Edition" subtitle.[3] Only one printing of the artbook was done, and it was available for a limited time from the Take-Two Store. The cover of this edition was developed based on the winning design from the BioShock Artbook Cover Contest.[4]

The BioShock iOS app features a digital version of the artbook with new images and information. 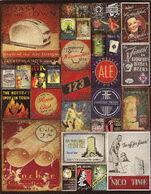 Advertisements from Breaking the Mold.