BioShock: Rapture is a science fiction novel set in the eponymous BioShock universe and was released on July 19th, 2011. It was written by John Shirley, and published by Tor Books in the U.S.A. and Titan Books in the United Kingdom. Its story covers events from the creation of Rapture until a point before the first game starts. Both familiar and lesser known characters from the BioShock universe are expanded upon in the story, as well as locations like Apollo Square and Point Prometheus.

The cover art was designed by Craig Mullins.[1] The glowing light on the globe indicates the coordinates of Rapture.

In 2009, in an interview with Gamasutra, creative director Ken Levine indicated that he was working on a novel set in Rapture with writer John Shirley.

"I'm working on the BioShock novel being done, with a writer named John Shirley, and I'm going to just sort of peek my nose in and write the prologue and the epilogue of that. And I'm sitting down to write it, and it's like, 'Oh! I can just write about Tenenbaum! I can just say what she's saying! And she can talk! And the audience may not go off and, like, shoot her in the head while she's saying it!'"[2]

By 2011, in an interview with Console Obession after the release of the book, writer John Shirley noted that one of the reasons for the novel's delay with the incorporation of BioShock 2 into the plot as well as getting Ken Levine's approval on the content.[3]

However, in the same year, Ken Levine replied on twitter that he had not read the book.[4][5]

In 2015, Ken Levine revealed on twitter that a book based on BioShock Infinite was underway with a new collaboration with writer Joe Fielder.[6]

On the BioShock Wiki, to segregate between information only given in the novel versus what is established in the games, a banner will appear above the paragraph with the following format:

The following is an unpublished author's note which was intended to be included in the novel.

It was the end of World War II. FDR's New Deal has redefined American politics. Taxes were at an all-time high. The bombing of Hiroshima and Nagasaki has created a fear of total annihilation. The rise of secret government agencies and sanctions on business has many watching their backs. America's sense of freedom was diminishing… and many were desperate to take their freedom back. Among them was a great dreamer, an immigrant who pulled himself from the depths of poverty to become one of the wealthiest and most admired men in the world. That man was Andrew Ryan, and he believed that great men and women deserved better. So he set out to create the impossible, a utopia free from government, from censorship, and from moral restrictions on science, where what you gave was what you got. He created Rapture -- the shining city below the sea.

But this utopia suffered a great tragedy.

In New York City, 1945, Andrew Ryan, a successful businessman, receives a report from his chief of security, Sullivan, on the terrifying results of the bombing of Nagasaki and Hiroshima by the United States. Convinced of the impending doom of civilization, Ryan shares with Sullivan a project he has been designing in secret to enable escape from an Atomic war. With all the preparations done (employing researchers, sending surveyors, and picking a spot), Ryan is ready to start building this grand work. Remembering the exile with his father from Russia and Communist persecution, Ryan dreams of what will be a fortress against the madness of the men in power, dedicated to freedom, called Rapture.

Part One: The First Age of RaptureEdit

In New York City, 1946, Bill McDonagh, a freelance plumbing contractor, is sent to do maintenance work on the bathroom of a recently built penthouse apartment atop the Andrew Ryan Arms on Park Avenue. He is noticed by the owner, Andrew Ryan, when he starts replacing the tin-plated fittings with brass, rebuilding it to a better quality at his own cost. Ryan is impressed by the plumber's honest craftsmanship and sense of initiative, traits that they both share, and sends his man Sullivan the next morning to offer McDonagh a job as his new building engineer.

In New York City, 1946, Sullivan goes to the docks to inspect The Olympian, the largest of three ships Ryan bought for his secret North Atlantic project and being filled with pre-fabricated parts. He meets there with Ruben Greavy, head engineer for the Wales brothers, the architects commissioned by Ryan for his plans, and both men discuss the project: How Ryan gathered the means for it, as well as its attraction of prying eyes such as government agents. Greavy voices the same concern as Ryan of a world divided by the United States and the Soviet Union, and trusts in Ryan's need for secrecy for this project.

Meanwhile, a rising con man going by the name of Frank Gorland takes over The Clanger (a bar) from its owner, Herv Merton, after cheating him over a loan. Gorland then enjoys the boxing setup at the bar, but mostly uses it to gather information from his customers. One day, he receives a visit from Voss, an FBI agent, who asks him questions about things happening on the docks, mentioning the North Atlantic project bankrolled by Ryan and millions of dollars of materials being sent out to sea. Working to find out more and a way to eventually profit from this secret operation, Gorland learns a few days later from a grieving woman about the death of her lover Irving, employed by Seaworthy Construction on underwater construction for Ryan. Gorland's efforts finally pay off when he locates The Olympian, and makes one of the ship's deckhands spill the beans, discovering the ship's use in supplying construction of an underwater colony in the Atlantic.

In New York City, 1946, Bill McDonagh is waiting outside of Andrew Ryan's office with his wife, Elaine, to deliver a report about the progress made on the tunnel. When Ryan arrives, he tells Bill that he's already aware of the progress made on the tunnel and instead tells him that the two of them will be going on a trip with two stops: one in the city and one that is far outside of the city.

In a limousine ride to their first stop, Bill tries to talk about the figures of the tunnel project with Ryan, but he is silenced by him. Ryan informs him that the tunnel project can progress without him and instead asks him if he is ready to meet the greatest challenge of his life. Bill doesn't hesitate to let Ryan know that he's ready for whatever he can throw at him, to which Ryan asks if he's ever heard of the North Atlantic Project. When Bill mentions his knowledge of the words only, Ryan attests the secrecy of the project from government agencies, including the OSS, British, and Soviet intelligence. This leads Ryan to question Bill on the concept of loyalty, to which Bill explains how he's loyal to who he's fighting against; not who he's fighting for. His answer pleases Ryan, who claims that he only aligns himself with people who are loyal like Bill. After denouncing the interests of the world's governments, Ryan asks Bill to take a trip with him to Iceland to see the North Atlantic Project firsthand. Naturally, Bill is taken back by the request to leave New York on a trip to Iceland, but given Ryan's seemingly deep trust in him, he tells him that he trusts him and will make the trip with him. As he agrees to make the trip, they arrive at the first stop of their trip.

In another part of New York, Frank Gorland arrives at Seaworthy Construction disguised as a delivery driver named Bill Foster. While snooping around, a man who seems in charge finds him and quizzes him. Frank tells the man he has a delivery of canned goods for a Mr. Andrew Ryan, but when he is told that Ryan never shows up at the docks, Frank takes the opportunity to gather more information by threatening to deny the delivery. Doing so nets him the news of the project being off the coast of Iceland and that they'll need tons of more canned goods to feed the project's workers. He also learns that a man named Rizzo is in charge of Seaworthy Construction while Ryan is away. When Frank tells the guard he'll find Rizzo to have him sign for the delivery, he is questioned on what delivery company he works for. Though Frank says he's with Acme, the guard doesn't trust him and makes him return to his delivery truck, but not before Frank sees a bathysphere in one of the warehouses. This makes Frank realize that there is a ton of money to be made if he can manage to get into Ryan's operation.

Andrew Ryan and Bill McDonagh arrive at a theater where Sander Cohen is performing his final number. A bunch of drunks outside the theater frustrate Ryan with their negative comments about Cohen, but he and Bill push on and enter the theater through the stage door. Together, they watch the end of Cohen's performance, to which Ryan admits it to be one of the more lackluster shows. After the performance is over, a dancer named Jasmine briefly discusses with Ryan her inability to advance beyond the chorus at the hands of Cohen. He assures her that she will have her time and offers to pay for elocution classes so she can improve her vocal performance. She is not entirely happy with his offer, but Ryan continues by offering a place in the new community he's developing. She's content with his offer and walks away as Sander Cohen arrives. Cohen and Ryan briefly talk while Bill feels uneasy about the way Cohen calls Ryan by his first name. Cohen reminds Andrew Ryan about an invitation to a gallery opening at the Verlaine Club, which will be showcasing a new art style called tableau vivant. Ryan admires Cohen's dedication to art, but Bill feels that Cohen's true side is hidden away deep. Cohen informs Ryan that his show will likely be closing earlier than expected, but Ryan assures him that he will have a special, captive audience in their own venue and that Broadway will be outdated. Cohen is pleased as he leaves Ryan and Bill to go to the dressing rooms. Before Bill can say anything, Ryan admits that Cohen can be a bit outrageous before changing the topic to ask if Bill is doubting himself whether he wants to travel to Iceland with him. Bill tells Ryan that he is committed and ready to go with no second thoughts.

Part 2: The Second Age of RaptureEdit

Part 3: The Third Age of RaptureEdit

(part of chapter 20): 1959, New York, Elaine McDonagh brings her daughter to a medical examination after their fleeing Rapture and reaching North America. Elaine is clearly a changed woman after persevering through the events in Rapture, and it is obvious that she knows her husband, Bill, was murdered for his actions against Andrew Ryan.

Control and Order vs. Freedom and Chaos Edit

The following is a list of every location visited or mentioned in the novel. Some are familiar, but others completely new:

Even with oversight from creative director Ken Levine, the novel is known to show inconsistencies and contradictions with evidence presented from the games.

It should be noted that the novel was published in July 2011 with BioShock being released in August 2007, BioShock 2 in February 2010, and the Rapture-based DLC for BioShock Infinite, Burial at Sea, released in November 2013 for Episode 1 and March 2014 for Episode 2. 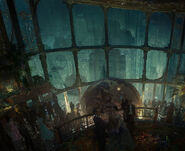 The full art for the novel's cover.

The French cover for the novel.
Add an image to this gallery

Retrieved from "https://bioshock.fandom.com/wiki/BioShock:_Rapture_(Novel)?oldid=320121"
Community content is available under CC-BY-SA unless otherwise noted.