A BioShock film had been confirmed, and was originally planned to be released in 2011, coinciding with the release of a third BioShock game. The film was set to be directed by Gore Verbinski, director of the Pirates of the Caribbean series. However, it was announced on August 24, 2009 that because of budget issues, and the prospect of filming some footage overseas, Verbinski had dropped out as director.[1] Verbinski remained as the film's producer, and is working with the new director, Juan Carlos Fresnadillo, who is best known for his horror sequel 28 Weeks Later, to manage the film's budget.

In early July of 2010 Verbinski announced that he was still active on the movie, and that he and Fresnadillo were working to reduce the budget and produce the film with an R-rating.[2]

In February 2011 Verbinski confirmed that pre-production on the BioShock film has stopped because no studio was willing to invest in such an expensive project with a violent theme.[3]

As of May 2012, Levine did mention that there is potential hope for the BioShock film to be made someday, even if an adaptation is not as necessary, especially compromising for a film version that both he and the studio will agree to make. In an interview, Levine didn't mention Fresnadillo, but he did nod to Verbinski's time working on the adaptation, as well as what it will take to get a BioShock movie made:

However, even with production seemingly dead, in 2014 Sony registered three domain names: bioshock-movie.com, bioshock-movie.net, and bio-shock.net.[5]

Actor Woody Harrelson ("No Country for Old Men", "Zombieland", "The Hunger Games") was asked about the movie and if he would take the role as Bill McDonagh and had this to say: "Nothing is confirmed so far, if they decide to push through with the project, my line is open."[6]

In 2015 emails exposed by Wikileaks revealed that Sony were obtaining the rights for a BioShock movie that would be “starting over but based on the same story as Gore Verbinski’s draft”. Another email revealed that Ryan Gosling was interested in the project and would be brought on board once the rights were sewn up. A further update on this revelation could be imminent.[7]

In 2017, after the success of the 2016 R-rated film Deadpool, Verbinski stated on Reddit that the movie might have a chance in this day and age.[8]

In 2019, Greg Russo, the writer for the then-upcoming Mortal Kombat, Resident Evil, and Saints Row films, stated that he had a great interest in making a film adaption of the game and had been trying to find the right people to make it happen.[9]

On March 3, 2020 the web site wegotthiscovered.com reported that a BioShock movie is in development by Universal Pictures. There is no more information available at this time. It most be stressed that "in development" does not mean that a movie is in current production or will ever go into production.[10]

While the script for the BioShock movie has not been released to the public, a writer for ‘’birthmoviesdeath.com’’ claims to have received a copy.[11] The script by John Logan follows the story of the game with changes appropriate to the difference in media.

The script starts off on an airplane with the main character, Jack, a recently graduated college student running away from a job prearranged by his father. After Jack’s plane crashes near a mysterious Lighthouse, he hears a prerecorded speech by the magnate Andrew Ryan and soon enters the ruined underwater city of Rapture. Jack’s only goal is to escape Rapture and is always on the run trying to do so. Strangely, there seems to be a connection between him and the city.

Many areas from the game are cut from the movie, but some like the Lighthouse, Medical Pavilion, and Neptune's Bounty are stated as being present. Jack encounters Little Sisters and barely survives an encounter with a Big Daddy in a 1950's style neighborhood that had been constructed in a large warehouse-like area. Jack meets Atlas in person early on and there seems to be a fair amount of interaction with him before he and Jack are separated. There isn’t a description of the Splicers, but they seem to be horrific both in appearance and in action. An encounter with Sander Cohen and an attack by Splicers leads Jack to use ADAM for the first time. After taking the ADAM Jack is very bloodthirsty and easily destroys the group of hostile splicers. For some reason ADAM is blue like EVE and not the red seen in the game. Familiar plot points such as Ryan’s “Bathysphere Speech” and Would You Kindly are still present, while characters like Tenenbaum appear to have been removed from the story.

The script depicts the movie as being very dark in tone. Rapture is an Art Deco ruin. Insane Splicers hunt Jack and each other through the shattered hallways of the dying city. Violence is common and brutal with Jack having an ear torn off and a Little Sister being horrifically murdered at one point. The ending is described as being dark, which points to the “bad ending” of the game being used for the movie, though that does not mean it is the same as the one in the game as it is described as being even darker. 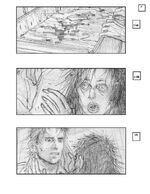 Storyboard of the protagonist encountering the Baby Carriage Splicer. 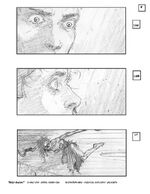 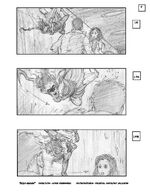 The spider and its prey. 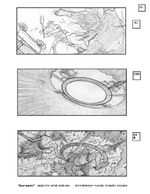 Plucked up and hurled into a ceiling light. 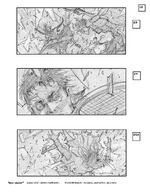 All he has is a tennis racket. 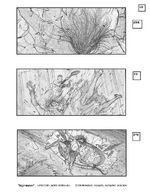 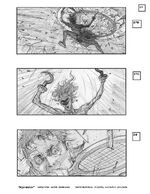 She's not finished yet. 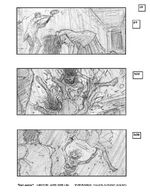 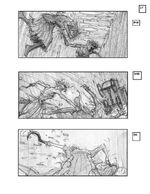 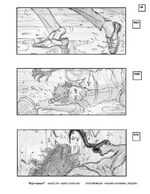 Our hero takes a tumble. 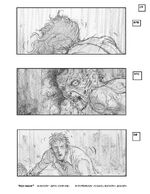 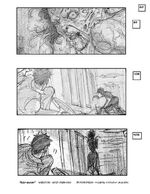 "Is it someone new?" 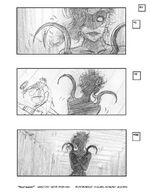 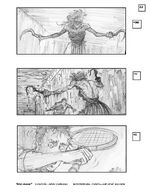 Nowhere to run to. 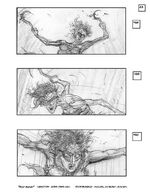 Somebody brings a gun to a hook fight. 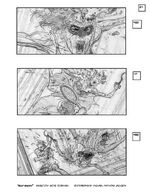 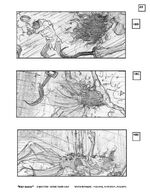 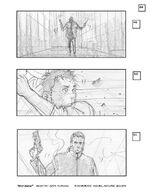 Another character coming to the rescue.
Add an image to this gallery

A long distance shot of the city.

The city of Rapture.

The base of Rapture.

A character standing by the dock. 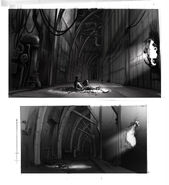 Someone has been thrown through a wall.

A person in a Big Daddy workshop.

The shadow of the Baby Carriage Splicer. 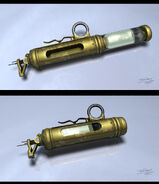 Concept art for the film by Tim Flattery.

Concept for a Bathysphere by Tim Flattery.

Concept art by Kasra Farahani for a sequence that takes place in a large power station in Rapture.

Retrieved from "https://bioshock.fandom.com/wiki/BioShock_(film)?oldid=320090"
Community content is available under CC-BY-SA unless otherwise noted.