“Congratulations, Mister or Missus citizen Rapture! You've been approved to join the Sinclair Solutions team as a product tester in our Home Consumer Rewards Program! Here at Sinclair, the customer knows best. That's why we'd like to invite you to test our home-defense products in the field and tell us how you feel! By participating to our DNA wide clinical trials, you will automatically earn bonus gifts free of charges! Yes, we thought you'd like the sound of that! So get out there and start earning those rewards!”
― Advertisement from Sinclair Solutions

BioShock 2: Fall of Rapture is the fully-featured Multiplayer experience developed by Digital Extremes, included in BioShock 2 and acting as a stand-alone game with its own content, gameplay and setting.

The game takes place approximately a year before the events of the first BioShock, and depicts the events of the Rapture Civil War. The player takes the role of spliced characters testing products for the company Sinclair Solutions, which attempts to cash in on the conflict between Andrew Ryan and Atlas while conducting field testing for Ryan Industries.

Fall of Rapture features its own plot which follows the player as they accumulate more experience points represented as ADAM, as well as prologue and epilogue scenes to respectively open and conclude the game.

The prologue starts on the Eve of 1959, at the Apartment which each participant receives from joining the Sinclair Solutions Home Consumer Reward Program. The player slowly recovers from their first injection of a Plasmid, delivered in a pack with a few weapons and other genetic enhancements as the first batch of products to test. As they recover, a speech from Andrew Ryan is broadcast on TV, in which he makes a toast to the coming year, wishing Rapture to recover from its current tensions. Once the player finishes listening to the first company message from the Sinclair Solutions' recording machine, an emergency announcement informs the player of a recent incident at the Kashmir Restaurant, thus marking the beginning of the Civil War.

The player is then able to start matches, gaining experience from each session and unlocking new content with each increase in Rank. These include Plasmids and new experimental ones, weapons and Gene Tonics as well as new masks and melee weapons to customize their avatar. It also unlocks messages from the Sinclair Solutions program, detailing briefly the situation in Rapture as the player progresses through the Bronze Club, Silver Society, Gold Circle, Platinum League and Diamond Partners. New Audio Diaries from the Log Recorder in the Apartment also become available, detailing the personal story of each of the playable characters. New quotes from the Rapture Standard newspaper and from various individuals commenting on the war reveal the growing collapse of society as the civil war progresses.

The epilogue, happening a year after the prologue, is played once the player reaches Rank 40. As they listen to the final message from Sinclair Solutions, which previously promised access to a "Mystery Vacation" for the most tenacious of its participants becoming Diamond Partners, a huge tremor interrupts the recording, shaking up the Apartment and sending the player to the ground. An emergency announcement from Andrew Ryan is then heard, informing citizens of approaching end to the Civil War, but also the coming of a new threat. He informs the city that its secrecy has been breached by the crash of an unknown airplane, and that a survivor is currently infiltrating the Lighthouse as he speaks. He then declares that all citizens' duties are to be put on hold until this new threat has been confronted and contained, while the main body of the plane appears falling from the surface and lands brutally right in front of the Apartment's windows.

There are a total of ten playable characters, two of them formerly being pre-order bonuses (Zigo and Blanche) then sold as a separate downloadable content, and the last two introduced with the first released DLC. Each character has their own backstory, a unique melee weapon, and unique dialogue during gameplay.

An optional multiplayer lobby is the interactive apartment in Rapture, rented out to the player's character. In the apartment, players may listen to new messages on their answering machine that they unlock after each new level. These messages advance a unique narrative and provide new background information that the player can only find through playing multiplayer.

The place can be divided into several areas of interest, each serving a functional purpose:

There are ten different maps representing various areas from BioShock. These locations have been re-tooled to fit a multiplayer environment. They feature both familiar and original aesthetics and decorations. Six extra maps are added through the Rapture Metro Pack DLC, and are three re-tooled locations from BioShock and three others from BioShock 2. As is typical with this game series, a narrative is built into these environments, giving the player a unique look at Civil War-era Rapture.

The player earns ADAM by playing online matches and completing trials. As they collect ADAM, they level up. With each level advancement, they will unlock new weapons, Plasmids, and Gene Tonics to customize their loadout. The player can create three separate load-outs and switch between them when respawning. It is prudent to use a loadout that complements one's teammates in the team-based modes. At the start of the multiplayer experience, the player only has access to the Pistol and the Shotgun, as well as the Electro Bolt, Incinerate!, and Winter Blast Plasmids, with Gene Tonics. However, after advancing through the game they will receive the Machine Gun, followed by other new tools. Alongside combat-oriented gifts, players are able to change their character's cosmetic traits. For example, one may endow their character with a mask or change their melee weapon (this does not affect its combat traits, however). Along with leveling, there are "trials" in multiplayer requiring the player to complete a certain task, such as killing a certain amount of enemies using a specific weapon or Plasmid.

There are fifty levels of character advancement and five "clubs" (overarching ranks). The names of the clubs are the Bronze Club, the Silver Society, the Gold Circle, the Platinum League, and the Diamond Partners. Upon reaching Rank 40, the player reaches Diamond Partner status, which represents the ultimate level of advancement through the ranks. Membership of the aforementioned "clubs" is awarded when the player reaches a certain rank. Ranks 41-50 can only be reached if the Sinclair Solutions Tester Pack DLC has been purchased.

Trials are challenges which, upon completion, grant the player an ADAM reward. Trials require the player to either fulfill a specific task several times or achieve a much harder challenge on one occasion. There are three types of Trials: Weapon Trials, Plasmid/Combo Trials, and General Trials. Each type contains various skill testing tasks.

When a player contributes in some way to their team or to themselves they receive an ADAM reward, the size of which depends on the action. Here is the list of known ADAM rewards as follows:

There are seven different game modes included in BioShock 2, and the last one added as Downloadable Content. Each supports up to ten players. Team-based game modes divide the players into two factions: those fighting for Andrew Ryan and those battling under Atlas. Each team has its own narrator providing voiceover on the events of the match; Atlas' side has a woman who refers to the enemy as "Fascists", while Ryan's team is organized by a man who calls the enemy the "Parasites". Scores are marked in the top right corner of the HUD, with the one at the top representing the winning score. The score in yellow represents which team the player is playing for in that match. Also when playing in teams, allies will always be represented in blue, while opponents are represented in red. This also prevails for hacked devices and zones in the Turf War game mode.

A total of seven different weapons are available to the player, though some are only unlocked when leveling up. Weapons have been altered from their original version from BioShock as to balance gameplay for multiplayer matches. Melee, in particular, is different in that the player can perform a quick-melee attack without having to switch to a melee weapon. Each character has their own unique melee weapon, although this is only a cosmetic change. Along with the weapons present in the original game (save for the Chemical Thrower), two new weapons are introduced in the multiplayer: The Nail Gun and the Elephant Gun. Each weapon can be upgraded with a choice between three upgrades per weapon, although only one upgrade can be equipped per weapon. These weapons do not have unique ammunition: unlike the singleplayer campaign, ammo takes the form of cartons of buckshot, and picking one up will fully restore all ammo to both weapons the player is carrying. The Research Camera exists in the form of a research option: passing near an enemy corpse opens a prompt offering the player the option to research the dead enemy. Doing so renders the player temporarily vulnerable, but grants them a damage bonus against that enemy upon researching them, and will only be lost if the player gets killed by the researched enemy, or wears a Big Daddy Suit.

Plasmids have returned and some can be used in a defensive fashion as well. To give an example, Geyser Trap (a prototype of Cyclone Trap) can be deployed in a large room and used to leap onto higher platforms to escape or set up camping spots. The player unlocks additional Plasmids upon gaining higher ranks. Up to two Plasmids can be equipped per loadout, and the player has access to a selection of eight different Plasmids, three of them multiplayer-exclusive.

Some Plasmids have had their effects modified for gaming purposes. For example, Electro Bolt will still prevent enemies from moving, although they will still be able to shoot. Likewise, enemies hit by Winter Blast will have their speed severely decreased instead of being frozen solid (although they can still be shattered). Plasmids can also be combined with the environment or, in some cases, other Plasmids. For example, the player can use Incinerate! on an oil slick to set it aflame, and can use Electro Bolt and Geyser Trap together to create an instant-kill trap.

The player's character gains new Tonics when leveling up. Up to three Tonics can be equipped at a time, and the player can choose from a selection of seventeen different Gene Tonics, each granting the player a passive bonus.

The player can become a Rosie Big Daddy by finding a Big Daddy Suit, which spawn at one of several predetermined locations inside the maps. Once the player wears one, he will have access to the Rivet Gun, six Proximity Mines, and a special Stomp attack which stuns nearby enemy players. The wearer also gains the ability to "squish" Splicers by falling on top of them from above. However, the player will lose the ability to use Plasmids as long as they remain in the suit, and will also lose all research bonuses acquired previously. Friendly Big Daddies produce a blue light from their portholes while an enemies one's shine red. In Survival of the Fittest, the Rosie's portholes shine yellow.

When turning into a Big Daddy, the player's health will be significantly increased, although it will no longer regenerate. Killing one also yields a significantly bigger ADAM reward, which places said enemy player as a prime target. The first Big Daddy suit spawns at the 13:00 minute mark on the clock. Once the player has been defeated, the suit can spawn again at a later time during the match. 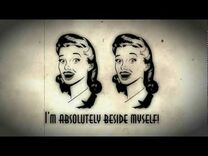 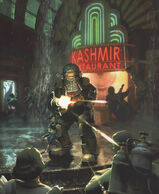 Concept art for the Multiplayer.

Unused loading screen.
Add an image to this gallery

Retrieved from "https://bioshock.fandom.com/wiki/BioShock_2_Multiplayer?oldid=324350"
Community content is available under CC-BY-SA unless otherwise noted.