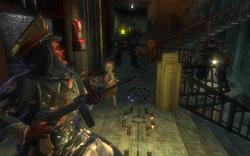 Big Daddies, or "Mr. Bubbles," and "Mr. B," as the Little Sisters call them, are lumbering bio-mechanical monstrosities, created to protect the Little Sisters. They are heavily armored and wield high-powered weaponry. There are two types of Big Daddies in BioShock: the Rosie and the Bouncer. Within each type, there are Regular and Elite forms. Elite types have much greater health and damage capabilities, and can be found in the later levels of the game. Rosies wear suits that closely resemble early deep diving suits, with a large oxygen tank. They carry Proximity Mines and a large Rivet Gun. Bouncers have an ominous look which more closely resembles today's personal submersible suits. Their primary weapon consists of a large drill or harpoon on their right hand. Most citizens of Rapture stay out of the way of the gatherers and their protectors. Big Daddies will not attack the player unless they think their Little Sisters are in danger. The player must defeat a Big Daddy in order to get ADAM from the Little Sister.

The Little Sisters, genetically modified prepubescent girls, are ADAM gatherers who were created by a scientist named Brigid Tenenbaum as a solution to the ADAM shortage. They extract inert ADAM from the dead (which the girls refer to as "angels") by using retractable needles, and then they consume this liquid, their bodies reprocessing it into a usable form. The BioShock team designed these characters in order to draw out an emotional response from players, who face an ethical choice between saving or murdering little girls in order to obtain much-needed ADAM. Regardless, gaining access to a Little Sister is severely difficult due to their symbiotic relationships with the Big Daddies. Once the Big Daddy protecting the Little Sister is defeated, the player is presented with the option to either save or harvest the Little Sister. Saving them, while giving the player less ADAM, cures the girls of their genetic programming and promises future rewards. Harvesting, on the other hand, gives double the ADAM, but kills the Little Sister in the process. Ultimately, the player's decision vis-à-vis the Little Sisters will influence the game's ending.

Security in Rapture revolves around a three-pronged approach with cameras as constant surveillance, automated static defenses as sentries, and automated mobile defenses as enforcers to travel to the location of disturbances. Enemies have some degree of control over the security system, as a few Splicers are able to turn these defenses to their advantage by hacking. It is also possible to turn security systems to one's advantage by using Security Bullseye or hacking them.

Deformed, genetically modified Rapture citizens who are remnants of the Rapture Civil War, the Splicers (also known as Aggressors) cannot survive without ADAM due to their extensive over-splicing and biological modifications. Splicers are referred to according to their abilities, such as "Leadhead" for those who wield guns. They normally roam the levels of Rapture searching for other inhabitants to kill and steal ADAM from. As their name would suggest, these enemies are aggressive and quick to attack, and they will use their enhanced physical strength, group tactics, and sometimes semi-biological weapons to kill all intruders. The player will encounter five different types of Splicers in BioShock.

Retrieved from "https://bioshock.fandom.com/wiki/BioShock_Enemies?oldid=317783"
Community content is available under CC-BY-SA unless otherwise noted.