Booker DeWitt is challenged by many enemies in his quest to escape Columbia with Elizabeth in BioShock Infinite. They are divided into two factions opposing each other for the control of the city: the Founders, who champion American exceptionalism and xenophobia and support Father Comstock and his prophecy, and the Vox Populi, an anarchist-communist workers' union movement led by Daisy Fitzroy whose ideology progressively became more violent and extreme as they clashed against their opponents.

Standard enemies are the most common foes encountered throughout the game. They usually have lower health than most security machines and Heavy Hitters, as well as being armed with melee weapons or various firearms.

While the vast majority of Columbia Citizens are non-hostile and will cower in fear when present during combat, there are a few specific exceptions who will defend themselves. Wearing no armor and carrying only basic weapons like batons and Pistols, they are weaker than the more professional Police and Soldiers.

The Police are the enforcing arm of the Founders. Wearing no armor and armed with truncheons and pistols, they are more challenging to combat than standard Citizens.

Wielding heavier armor and more powerful weapons than their lesser counterparts, Soldiers form the elite force of both the Founders and the Vox Populi. They are easily distinguishable from other enemies by their padding and ammo belts.

Columbia also has security machines in order to defend its districts. These automatons have more health than the standard human enemies and are tougher to bring down. Some of these machines can be possessed to fire on the player's foes. 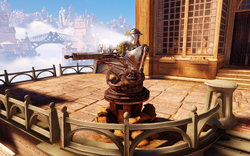 These heavy machine gun turrets are capable of attacking on their own, wielded by automatons in the guise of soldiers of World War I.

Capable of attacking on their own, these turrets are wielded by automatons in the guise of Civil War soldiers. They attack by firing rocket-propelled grenades at a lower rate. Unlike the Gun Automatons, they are rarely seen around Columbia.

These automated turrets are able to float and navigate through the air with the use of balloons. They sport a Gatling Gun at their base and a bright spotlight which centers on the player's location.

Security Zeppelins are large airships used by the Founders and the Vox Populi to bombard targets on the ground, as well as to establish local air superiority by attacking other airships. Unlike the ubiquitous Gunships, they are rarely seen around Columbia, and appear to utilize a combination of real world technology to achieve flight and locomotion.

Barrage Automatons are huge turrets which fire a barrage of rockets. They are mounted both in buildings and vehicles like Security Zeppelins and Gunships.

Heavy Hitters are extraordinarily powerful enemies, possessing unique abilities that set them apart from the rest. These can range from vastly enhanced attributes to entirely supernatural qualities.

The Handyman is a human artificially bonded to a mechanical suit, possessing great strength and speed, as well as a short temper. Handymen are dressed in ragged suits and have a gorilla-like posture and build. They also have exposed human body parts, particularly their head and heart, the latter of which is kept in a fluid-filled glass tank on their chests attached to several hoses. Two massive doll-like porcelain hands replace the originals, and are strong enough to grab and throw other enemies at the player. The Handyman's legs are equally strong, granting him the ability to jump great distances and charge at high speed. Thick bundles of cables run from their limbs to a pair of conductors on their backs. 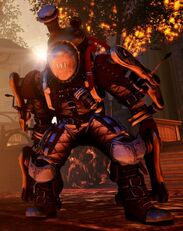 The Fireman has the ability to emit a wave of fire that radiates around him and throw fireballs at a distance. He will also attempt to self-destruct and take the player down with him when low on health. The Fireman is easily noticed in a fight as upon seeing Booker he emits a loud mechanical shout or taunt.

He is heavily armored in a padded fireproof suit while several leather straps secure what appears to be a boiler on his back. His entire face is concealed by a shiny mask with three vertical viewports which resembles a modified part of an old stove. While the Fireman is immune to Devil's Kiss, Booker can acquire the Vigor from this enemy from the first encounter with one.

Perpetually surrounded by a flock of crows, the Zealot of the Lady is dressed in a long black cloak with a pointed hood concealing his face, the ceremonial attire of the Fraternal Order of the Raven. He has long silver chains entwined around his torso, supporting the coffin chained to his back. The enemy attacks using a sword, and can also teleport. While the Zealot is immune to Murder of Crows, Booker can acquire it the first time he fights this enemy.

The Beast is an enemy clad in heavy blast armor and armed with a Barnstormer or Pig Flak. Due to their armored bodies, they can fire explosive rounds at close quarters without taking damage.

The Siren is an enemy with a ghost-like appearance, and has the ability to bring back the dead with the call of her screeching voice to fight Booker. She provides a challenge to the player of focusing their attention to attacking her or her undead minions.

The Boy of Silence is the equivalent of a Security Camera in Columbia. Wearing a blue suit and blinded by his large helmet, he's able to detect Booker via the beam of light coming from his mouth. The player must choose whether to sneak by one or engage in combat, which either by detection or opening fire can trigger a Boy of Silence to emit an alarming screech to alert nearby enemies.

The Splicers from Burial at Sea are precursors to the more mutated creatures encountered later in Rapture's history. They have recently begun to slowly lose their sanity and show severe scarring from battles. The majority of Splicers were all locked up in Fontaine's Department Store for three months, due to the Rapture Council having already banned Fontaine's-related products, early drinkable Plasmids, and early Tonics named "Gears".

Frank Fontaine's former minions who have heavily indulged in the Old Man Winter Plasmid, leaving them with pale blue skin and large ice protuberances on their bodies. They are highly aggressive and resilient foes, charging at the player and firing at them with a slew of ice projectiles. Defeating the first Frosty grants Booker acquirement of Old Man Winter, which allows him and Elizabeth to move onward to the Housewares building.

Machine Gun Turrets appear in Burial at Sea - Episode 1 and Episode 2 while Grenade Launchers appear only in the first episode. All turrets are initially hostile, but they can temporarily be made allies by using Possession on them. After Possession wears off, the turret will be neutral to the player until attacked. In Burial at Sea - Episode 2, Elizabeth can disable turrets without destroying them by using her lockpicking skills.

The Bouncer Big Daddy returns with attack patterns similar to previous games, but now can also shoot his drill like a grappling hook, used to navigate easier underwater but also to pull his enemies toward him.

Andrew Ryan's private enforcers, which he sends down to Fontaine's to eliminate Elizabeth and Atlas and his thugs. Like most of Rapture's population, they are spliced, evidenced by their deformed looks, but act far more sane and organized than other Splicers, suggesting Ryan keeps them on a tight dose of ADAM usage. Their common troops use batons, revolvers, shotguns and crossbows. Fire-wielding, armored Houdini Splicers are also amongst their ranks, with an attack style similar to the Firemen.

Retrieved from "https://bioshock.fandom.com/wiki/BioShock_Infinite_Enemies?oldid=319563"
Community content is available under CC-BY-SA unless otherwise noted.