The original soundtrack for BioShock Infinite and its downloadable content, Clash in the Clouds, features compositions by Garry Schyman, who previously composed the BioShock and BioShock 2 orchestral scores. Additional tracks were composed by Irrational Games' music director Jim Bonney and written by Ken Levine. Additional artists are specified for each track.

In addition to veteran composer Garry Schyman, music director Jim Bonney was brought in to help contribute to the score. Part of new challenge was that Columbia was still a living city in the air which required a different feel than the dilapidated, damp corridors of Rapture. Since the story focused on Booker and Elizabeth the score was designed to give a "more intimate experience".

Ken Levine conferred with Schyman to create a simpler pieces unlike the grand orchestral sound from the first BioShock. Schyman at most used a maximum of ten players in his ensembles. Since the orchestrations were smaller, instead of writing the entire score and having a complete recording session, small samples were recorded for various game cues as they were written. They would be given to Bonney to mix down into video clips for review by Levine.[1]

"Elizabeth" was not initially requested by Ken Levine. Garry Schyman composed it after seeing how Elizabeth transformed from a minor character to a central role. The original mockup was accomplished with a live string quartet as opposed to using synthesized samples.[2] For Schyman, "finding her theme was what helped me find the score".[3] "Lighter Than Air" was designed to have a more happy and "chipper" feeling for citizens going about their business as a counterpart to "Welcome to Rapture". Much of the tune was inspired by Stephen Foster melodies from the 1800s.

"Welcome to Columbia" resulted because Jim Bonney had a out-of-tune and off-key piano in his office. It created an "old time feeling, a sort of beautiful, quiet feeling" after all the commotion in the rocket as it pierces the clouds to look at Columbia for the first time.[4]

More aggressive pieces such as "Battle for Columbia" were more primal with some parts involving Ken Levine banging on a drum from Jim Bonney's office. However, Garry Schyman also included a string player playing very intensely while adding percussion using small distinct taps as opposed booming rhythms. He further comments that the strings and the percussion were not recorded under perfect quantization with the notes perfectly aligned, giving an almost sloppily played rhythm. The percussionist experimented with techniques including using old violin with a spoon.[5]

This became a part of the dynamic music that defined the combat in BioShock Infinite, a different approach from how combat was presented in BioShock. Schyman realized that such dynamic music "added drive" and could be explored in two levels of intensity: music when not directly involved in conflict and in the heat of battle. Gameplay cues included string stings when scoring a headshot or the finishing lick when the last enemy is killed.

"Lutece" was an interesting venture into the "quirky and enigmatic personalities" of the characters. Schyman describes it as a tango-ish waltz rife with humor and tongue-in-cheek in contrast to the violence seen in the game.

This is the list of soundtracks and re-orchestrated songs from the official digital BioShock Infinite Soundtrack included with the limited Premium and Songbird Editions.

The following tracks are all songs and music composed for the game which were not featured on the digitally released album. 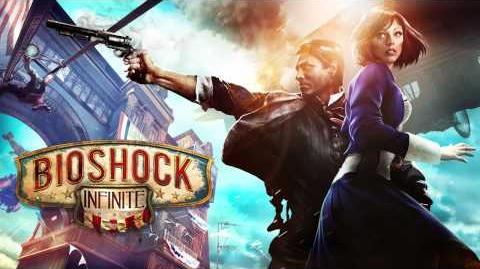 Retrieved from "https://bioshock.fandom.com/wiki/BioShock_Infinite_Original_Soundtrack?oldid=322172"
Community content is available under CC-BY-SA unless otherwise noted.