The BioShock Infinite Season Pass is a package which includes the first three major pieces of downloadable content for BioShock Infinite. Along with these DLCs, it also includes the Early Bird Special Pack, which provides four exclusive Gears, Machine Gun and Pistol Damage Upgrades, gold skins for each weapon, and five Infusion bottles for the main campaign. BioShock-Themed Team Fortress 2 Items also comes with the Season Pass for Steam users, including a Pocket Mister Bubbles (aka a Big Daddy plush) and two Motorized Patriot masks: a Washington Mask and a Franklin Mask.

The Season Pass was released on March 26th, 2013, although it was available for pre-ordered beforehand. It is $19.99 USD for PlayStation 3 and Windows PC, and 1,600 Microsoft Points for Xbox. The overall total of each DLC individually is $35.00 USD.[1] All DLCs included in the Season Pass are also available individually as of March 2014.[2]

The followings are the downloadable contents provided by the Season Pass: 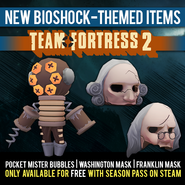 Banner for the Season Pass on Steam.
Add an image to this gallery

Retrieved from "https://bioshock.fandom.com/wiki/BioShock_Infinite_Season_Pass?oldid=315165"
Community content is available under CC-BY-SA unless otherwise noted.