The Bouncer is one of the five functional types of Big Daddies, along with the Rosie, Rumbler, Alpha Series, and Lancer. Bouncers are more agile than Rosies, but are entirely ineffective in ranged combat. The Bouncer's main weapon is an oversized Drill (and in the case of the Elite Bouncer a spinning harpoon) attached to his right arm and powered by the internal combustion engine on his back. They generally attack using powerful blows at close range, with a fast charge being their only offensive long range ability. The Bouncer, along with the Rosie, are the only Big Daddies to have an Elite form.

Wrench does +50% damage to all enemies

In addition to normal Bouncers, the player encounters Elite Bouncers, which use a spinning harpoon instead of a drill, are decorated with red stripes, and are more difficult to deal with. The regular Bouncers are encountered in the Medical Pavilion, while the Elite Bouncers are present in Fort Frolic, Hephaestus, and a single one in the Proving Grounds. Before then, two Bouncers are seen in the introductory level Welcome to Rapture: one accompanying a Little Sister as she inspects the semi-conscious Jack after he injects himself with his first Plasmid, and another protecting a Sister from an attacking Splicer in the Footlight Theater.

The Bouncer, like the Rosie, the Rumbler, and the Lancer, has three "moods" that may occur when the player encounters them. These moods appear as the color of the small portholes on the Bouncer's helmet, along with his wrist.

When in combat, the Bouncer will produce three different kinds of attack:

How to kill a Bouncer/Rosie in seven seconds using only one shot of Incinerate![]

Equip Incinerate! (any level). You should have the Natural Camouflage gene tonic.

By the end of the alarm, the Big Daddy will be either severely weakened or dead, without the player risking themselves at any point. Note: This strategy is more effective on Bouncers as they cannot destroy Security Bots unless they stray too low.

Bouncers make a return as enemies in BioShock 2 with exactly the same traits they had in the previous game, despite a slightly different airtank. A single regular Bouncer is encountered in Ryan Amusements while Elite Bouncers appear in Dionysus Park. Before then, a Bouncer is seen walking on the seafloor outside of the Adonis Luxury Resort. The Elite Bouncer from BioShock 2 is not white with red trim like in the first game, but a dark gray with red trim, with both still sporting the large red collar. This is merely a cosmetic difference, as both have the same health and attack behavior.

Increased Drill damage to all enemies

In BioShock Infinite, when Elizabeth transports herself, Booker DeWitt, and Songbird to Rapture after the Siphon's destruction, a dead Bouncer can be seen inside a glass tunnel near the Welcome Center with its Little Sister weeping beside its corpse.

The story is set right before the 1958 New Year's Eve Riots, and the Bouncer can also shoot its drill like a grappling hook, used to navigate easier underwater but also to pull its enemies towards him, whether they are on ground or riding Pneumo Lines. Before Booker is forced to fight one in the Toys department of Fontaine's, a Bouncer is seen outside of Market Street, doing repairs with its drill before grappling away, and again next to the Little Sister's Orphanage billboard when taking the elevator to High Street.

Elizabeth encounters Bouncers again during her adventures in Rapture. The first Bouncer is found roaming in Bathyspheres DeLuxe. The second Bouncer appears in Yi Suchong's secret lab. This Bouncer that Elizabeth helps bond to a couple of Little Sisters is the same one that kills Suchong.

A promotional image of the Bouncer.

An early promotional image of a Bouncer, along with a Little Sister and a Security Bot.

A Bouncer protecting a Little Sister.

A render of the final version of the Bouncer.

Bouncer helping a Little Sister getting into a vent.

A Bouncer in the Footlight Theater.

A Bouncer slamming a Splicer at the window.

A Bouncer impaling a Splicer with drill.

A Bouncer in Medical Pavilion.

A Bouncer charging at a Splicer.

Bouncer about to slam the ground with his drill.

A dead Bouncer in the Welcome Center.

A Bouncer killed by blast.

Elite Bouncer pushing back the player.

Elite Bouncer about to slam the ground with his drill.

A Little Sister getting on an Elite Bouncer.

An angry Bouncer met in the Proving Grounds.

A Bouncer bursting through the wall.

Renders of the Bouncer from BioShock: The Collection. 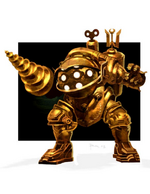 Concept Art for a Deco-Bouncer, as seen by Little Sisters. 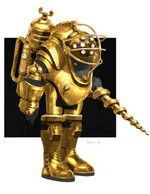 Concept Art for an alternate Deco-Bouncer, as seen by Little Sisters.

A Bouncer seen walking outside of the Adonis Luxury Resort.

A Bouncer and his Sister in El Dorado Lounge.

An Elite Bouncer protecting a Little Sister in Dionysus Park.

A Bouncer charges while on fire.

Promo image of the new Bouncer design for Burial at Sea. 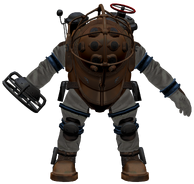 Render of the clean Burial at Sea Bouncer. 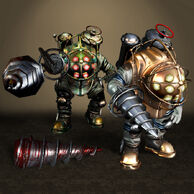 A clean Bouncer, a degraded Bouncer, and a bloodstained drill.

A promotional image of the Bouncer inside Fontaine's.

A Bouncer in Episode 1.

The Bouncer fires his drill.

A Bouncer next to a Little Sister's Orphanage billboard.

The Bouncer about to launch his drill against Booker.

The Bouncer in Episode 2. 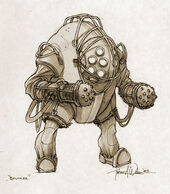 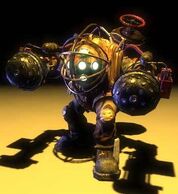 One of the original ideas for the Bouncer.

An early Bouncer roaming around the Medical Pavilion.

An early gameplay screenshot of the Bouncer with its two hydraulic weapons.

The player fighting the Prototype Bouncer in an early version of Hephaestus.

A marshmallow image, used by Nate Wells and Rob Waters, to fill in as one of the blank substitutes for the Bouncer's hydraulic weapon, before finalizing the drill. 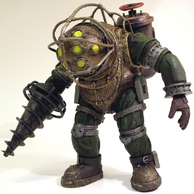 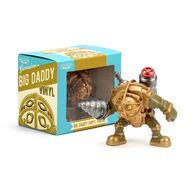 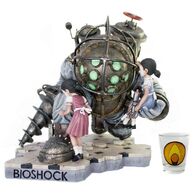 A replica of the imprinting scene between the Bouncer and Little Sisters from Burial at Sea - Episode 2. 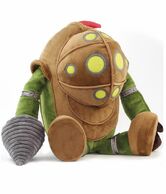 For appearances of the Bouncer outside the BioShock series, see BioShock in Other Media.