The Boys of Silence are enthralled young men fitted with sense-enhancing helmets who are forced to act as watchmen. Booker DeWitt encounters them in Columbia during the course of BioShock Infinite once he reaches an alternate Comstock House. 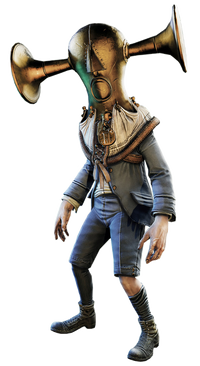 “My children are without blame, without fault -- and without choice.”
― Elizabeth[src]

Boys of Silence are outfitted in blue suits that are reminiscent of a school uniform. Their most noticeable feature is their large metal helmets, which amplifies their hearing but obscures their face. These helmets have been fitted onto leather shoulder straps, fastened on by metal clamps, and padlocked shut. Apparently fitted with their uniforms early in life (and have since outgrown them), their blazer sleeves are too short for their arms and their trousers have torn, despite being called "Boys", their hands show apparent deterioration of advanced age.

Referred to as "Elizabeth's children", they are in fact men brainwashed from childhood and forced into total subservience for decades. Because of Elizabeth's intervention, they also have limited control over Tears. This allows them to partially control the Lunatics of Comstock House, and to teleport out of existence after raising the alarm or being attacked.

The Boys of Silence do not actually engage in combat. Their primary purpose is to keep watch over the facility, and of the similarly brainwashed men in George Washington, Benjamin Franklin, and Thomas Jefferson masks, who are referred to as the Lunatics. Rather than fight Booker directly, Boys of Silence summon the men to fight for them. When summoned, the Lunatics charge head-on and will not hesitate to land devastating blows with cudgels like Thuggish Splicers.

The Lunatics are the inmates of Comstock House. Once ordinary citizens of Columbia, these individuals did not fall in line with Elizabeth's totalitarian rule and were brought to the asylum to be reconditioned. In order to be "purified," they were exposed, via Tears, to every version of themselves across time and space. This traumatic experience shattered the mind leaving them as broken, will-less husks who shuffle aimlessly around the facility. The event also instilled in them minor Tear-like characteristics such as intangibility, and thus they cannot be harmed unless awakened by a Boy of Silence. They can be seen saluting the Boys of Silence occasionally.

The Boys of Silence are encountered in an alternate-timeline version of Comstock House, and act as stationary sentries. A beam of white light from their mouths indicates their line of "sight," and Booker must maneuver around them to avoid notice.

If Booker enters a Boy of Silence's line of sight it will stand still and focus on him. If he stays for too long, gets too close to the Boy, or attacks it, the Boy of Silence will let out a piercing scream and teleport away. Though the scream deals only minor damage at close range, it pulls every nearby minion through to the current reality, allowing them to attack Booker and rendering them mortal. The minions themselves only wield wooden clubs, but come in great numbers and are tougher than most enemies.

Attacking a Boy of Silence serves no purpose, as they are impervious to damage and will immediately sound the alarm. However, they can be completely bypassed: they can only see whatever their masks illuminate and so walking outside of their range of vision won't attract their ire. If they do happen to spot Booker, they will momentarily stand still. If the player retreats out of their line of sight in time, they will resume scanning the area, otherwise they will eventually sound the alarm.

One of the more notable Boys of Silence is encountered in the Warden's Office just after unlocking the gate to reach Elizabeth in the torture chamber. Once the switch to deactivate the lock is pulled, the player turns around and finds themselves face to face with a Boy of Silence who immediately sounds the alarm.

In Burial at Sea - Episode 2, a Boy of Silence helmet can be found in the Surgical Suite in Fink MFG Research Laboratories of Jeremiah Fink's Factory. This could imply that Fink himself created the Boy of Silence idea, long before Elizabeth attacked New York in 1983. 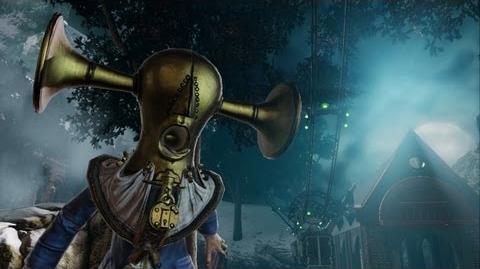 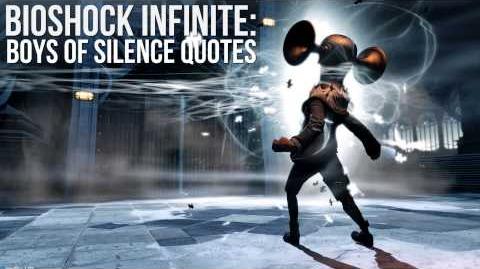 Concept art for Boys of Silence.

Concept for the mouth opened. 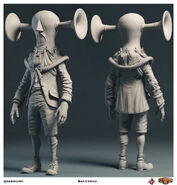 The Boy of Silence seen in a demo. 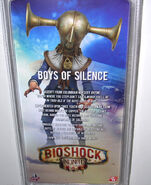 Back of Boy of Silence toy box.

Boy of Silence as a chocolate treat. 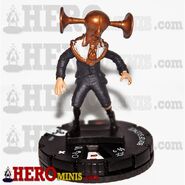 Figure of Boy of Silence.

The Boys of Silence Steam Trading Card.
Add an image to this gallery

The Boy of Silence searching.

The Boy of Silence detecting.

The Boy of Silence ready to scream.

The Boy of Silence screaming.

The Boy of Silence teleporting and enraging Lunatics.

Boy of Silence helmet found in the Surgical Suite.
Add an image to this gallery

The Tear's effect on the Lunatics (GIF).
Add an image to this gallery

Retrieved from "https://bioshock.fandom.com/wiki/Boy_of_Silence?oldid=316002"
Community content is available under CC-BY-SA unless otherwise noted.