The Splicer model "Breadwinner" came to Rapture to get rich through big business. He cares only for his own advancement and cuts down anyone who gets in his way. He has convinced himself that Rapture's collapse is a "small problem" in his ultimate goal.

In the sequel, he looks more deformed than in BioShock, with some tumors growing from his arms, legs, face and (most noticeably) his stomach; apparently, in his left hand it looks like some of his fingers have fused together.

The following are phrases that the Breadwinner Splicers will say in BioShock. The name of the source audio file is listed, when known.

In Olympus Heights or Apollo Square[]

The following are phrases that the Breadwinner Splicers will say in BioShock 2. The name of the source audio file is listed, when known.

Picked Up With Telekinesis[]

Breadwinner wears the stylish suit of a businessman. It consists of a double-breasted, herringbone jacket with a wide, notch lapel, trousers, pair of loafers, dress shirt, tie, and pocket square. Splicing and the Civil War haven't killed Breadwinner, but both have inflicted serious damage upon him. His face is sagging, beaten, and scarred. He has a bandaged wound above his right eye and there's a large bandage covering his left ear. He has blue eyes and black, receding hair. His suit is disheveled and both his hands are bandaged. Breadwinner can wear either a dark grey or white fedora hat as an accessory.

Model 1: The primary model wears a blue blazer. His pants are brown and grey in a glen plaid pattern, his buttons are gold, his shirt is a buff color, his shoes are brown, his pocket square is red, and his tie is red and yellow with a red sun design on it. He has thick blood splatter across his blazer and appears to have dandruff flakes covering his head, face, and shoulders.

Model 2: This model wears a grey pinstripe suit. His buttons are gold, his shirt and pocket square are white, his shoes are a dark greyish brown, and his tie is a deep sky blue with and black, yellow, and purple circle designs on it. He has thick, dried blood droplets across his blazer and bleach or rust stains across his pants and shoes.

Model 3: This model wears an olive green glen plaid blazer. His pants are an eggplant color, his buttons match the blazer, his shirt is a buff color, his shoes are brown with white on the tops, his pocket square is white, and his tie is pink with white and yellow circle designs on it. He's covered in thin blood spray. He has salt and pepper hair.

Model 4: This model wears a cream colored suit. His buttons match the suit, his shirt is a buff color, his shoes are black, his pocket square and tie are a deep blue with a yellow circle designs on it. He has scuffs of dried blood all over him and three gold buttons on both cuffs. He seems to be suffering from vitiligo.

Model 5: This model wears a slate grey suit and pants. His shirt and buttons are white, his shoes are black, his pocket square and tie are pink with black, blue, and yellow circle designs on it. His outfit is soiled green and white stains and has three gold buttons on both cuffs. This model has black markings running down his eye, red hair, and a five o'clock shadow.

Model 6: This model wears a teal pinstripe suit. His buttons and pocket square match the suit, his shirt is white, his shoes are black, and his tie is a rose color with and blue and yellow circle designs on it.

Model 7: This model wears the uniform of the Saturnine cult. Located only in Arcadia, his suit is brown and grey in a glen plaid pattern, similar to the primary model, but is streaked with red and white paint.

Breadwinner wears a bowtie and a silk jacket with a flower pinned on the lapel, more suited to a party than a business meeting. The right side of his face is sagging so much that it forces his eye shut. There are growths on his stomach, the inside of his left thigh, and on his left bicep which are showing through tears in his clothing. He carries a small comb in his left pocket. His chest is visible, the skin on which is stretched tightly over his sternum and ribs. His hair is combed back and he has a bit of a bald spot on the back of his head. The fingers on his left hand are fused together. As an accessory, he can wear a pair of glasses, a black or white fedora, or a top hat.

Model 1: The primary model has light skin, light brown hair and blue eyes. He is clean-shaven and wears a cream-colored jacket, a black bowtie, black pants and black shoes with white spats. He has a red flower pinned on his lapel. His cream-colored shirt is unbuttoned all the way down and he does not wear socks.

Model 2: This model has tan skin, black hair and dark grey eyes. He has a slight 5-o'clock shadow and wears a black jacket and pants with white pinstripes, a white bowtie, and black & white wingtip shoes with dark grey spats. He has a white flower pinned on his lapel, and there are veins that are barely visible on the growths on his stomach, bicep, thigh and face. His white shirt is unbuttoned all the way down and he does not wear socks.

Model 3: This model has light skin, auburn hair and blue eyes. There is a cluster of small, inflamed growths on the right side of his forehead. He is clean-shaven and wears a dark blueish grey jacket with a windowpane pattern, light blue pants, a red bowtie, and brown & white wingtip shoes with blue-grey spats. He has a light pink flower pinned on his lapel. He wears a white shirt which is unbuttoned halfway down, but he does not wear socks. His shirt and pants are covered in brown, yellow and red stains, and there is a red mark on the skin around both of his ankles.

Model 4: This model has tan skin, brown hair that's going grey, and black eyes. On his neck and on the right side of his face are dark blue veins. He has a small mustache and wears a brown herringbone jacket with yellowish cream-colored pants, a blue and red argyle bowtie, and brown shoes with white spats. He has a cream-colored flower pinned on his lapel. His yellow shirt is unbuttoned halfway down and he wears yellow socks with a brown argyle pattern.  There are dark red stains on his hands and fingers, and on his pants.

Model 5: This model has pale skin, red hair, and green eyes. He has a pencil-thin mustache, and wears a yellow jacket and red plaid pants, a blue bowtie, and brown shoes with white spats. He has a cream-colored flower pinned on his lapel. His stained white shirt is unbuttoned halfway down and he wears white socks with a brown argyle pattern. There are dark red stains on his hands and fingers. 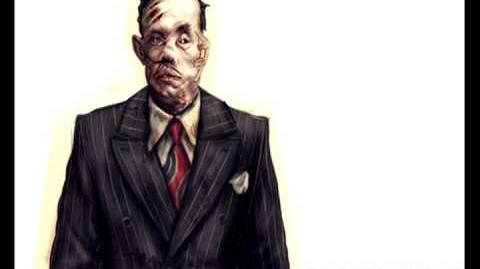 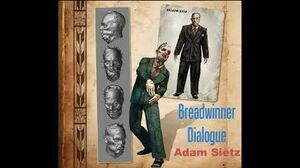 More dialogue from Breadwinner in BioShock.

At the scene of the crime.

A masked Nitro Splicer prepares to throw a smoke bomb.

A breadwinner prepares to fire in The Limbo Room.

The original concept art for the Breadwinner.

Concept art for the Breadwinner with an alternate face.