The Splicer model Brute is exclusive to Brute Splicers, a new type of Splicer featured in BioShock 2. These Splicers are the result of splicing the leftover dregs of Sports Boost and Armored Shell Gene Tonics, a cocktail first invented by Leo Hartwig.

Brutes resemble enormous men with a gorilla-like build. Like most Splicers, they have misshapen faces and bubble-like growths on their arms. They wear tight-fitting shirts that look like the buttons are going to pop off, and vests that have already encountered that fate (save for one or two buttons). The right sleeve is torn, revealing more mutation bubbles. Concept art depicts him as being nearly bald, with only a few hairs standing on his head.

The Brute Splicer speaks with a cockney British accent. He acts very aggressive, and has no fear of being beaten due to his increased muscle-mass. He also appears to be homophobic, stating that he could have been a wrestler but chose to be a boxer instead to avoid the physical contact. However, his dialogue strongly implies that he himself is homosexual, and when befriended with Hypnotize Level Three he acts and speaks more calmly, cozying up to the player and muttering how handsome Delta looks in his suit.[1]

The following are phrases that the Brute says in BioShock 2. The name of the source audio file is listed when known.[Audio files needed] 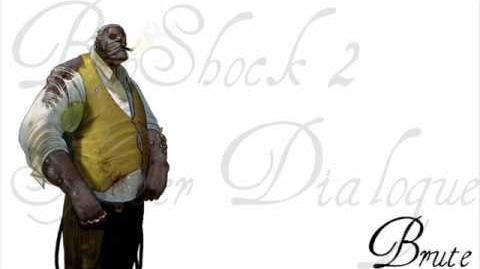 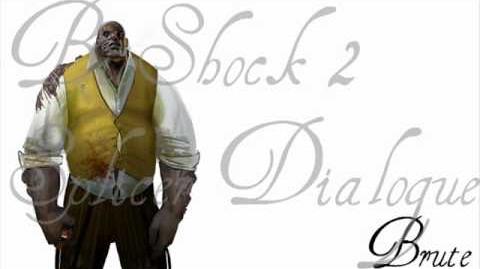 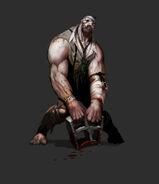 Concept art from Deco Devolution: The Art of BioShock 2.

A Brute with the outfit of a Ducky Splicer.

The Brute Splicer, as he appears in the release trailer for BioShock 2.

Turnaround for the release trailer model of the Brute Splicer.

Render of the in-game model's skins. 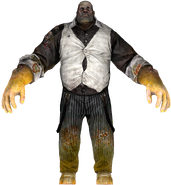 A render of the Fiery Brute Splicer from Minerva's Den. 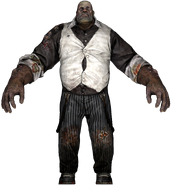 A render of the Fiery Brute Splicer skin without the fire effects.

A Brute encountered in BioShock 2.

A Brute battles a Rosie.

Delta is about to face off against a Brute in the Little Sister's Orphanage.

Subject Sigma facing off against a Fiery Brute Splicer in the Exhaust Venting.