For the achievement/trophy with the same name, see Burial at Sea (Achievement/Trophy).

Burial at Sea is a DLC pack for BioShock Infinite. Split into two episodes, Burial at Sea explores Rapture on the eve of the underwater city's fall from grace through the eyes of Booker DeWitt in the first episode, and as Elizabeth in the second. The DLC pack is available for 1200 Microsoft Points for Xbox 360 players (subject to change real price) and $15.00 USD for PS3 and PC players per episode. Episode 1 was released on November 12th, 2013[1] and Episode 2 on March 25th, 2014.[2] Burial at Sea is also a part of the BioShock Infinite Season Pass, BioShock Infinite: The Complete Edition and BioShock: The Collection. The first episode features a lively and active city similar to the base game, while the second is based more on stealth-focused gameplay.

Various Film Noir title cards, which served as inspiration for the logo. 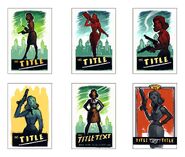 Concept art of a promotional poster for Burial at Sea, by Kat Berkley.