“Even in a utopia, someone has to clean up the mess. That's where I come in. The girl promised me a way out, and I was desperate enough to believe her. We were all buried at sea; we just didn't know it yet.”
― Booker DeWitt[src]

BioShock Infinite: Burial at Sea - Episode 1 is the first part of the story-driven downloadable content of BioShock Infinite, which was released on November 12, 2013 for $14.99 USD on PlayStation 3, Xbox 360, Windows PC and OSX.[1] It is also included with the BioShock Infinite Season Pass, BioShock Infinite: The Complete Edition and BioShock: The Collection. This campaign puts the player in the perspective of Booker DeWitt in a new story, taking place in the city of Rapture right before its fall.

In the city of Rapture, Booker DeWitt is a well known private investigator, handling his clients' dirty work, when not drinking and gambling. On the eve of 1959, a mysterious woman by the name of Elizabeth asks him to investigate the disappearance of a young girl named Sally. Elizabeth's intentions are vague and she is unwilling to reveal any vital information, saying only that Sally is alive and elite artist Sander Cohen may have information regarding her whereabouts. The duo journey to Cohen's at High Street, but are denied entrance to the club. Needing the masks specifically crafted for the club's exclusive party guests, Booker and Elizabeth search the nearby shops. With Elizabeth distracting the shopkeepers, Booker is able to retrieve the required mask and the two are welcomed into Cohen's party.

As they enter the Garden of the Muses, Cohen is working on his latest piece of "performance art." However, it falls short of the obsessive artist's high standards, and he disposes of the models. After the "light show," Booker and Elizabeth confront Cohen about Sally. He expresses his suspicion of Elizabeth's intentions but agrees to reveal Sally's location if Booker and Elizabeth dance to inspire his 'muse'. Faced with no other options, the two waltz. It is only moments before Cohen once again finds an error and shocks them unconscious. However, he does keep his end of the bargain: he drags them to a Bathysphere, claiming it will take them to Sally.

When Booker and Elizabeth awake, they notice the Bathysphere is headed away from the city and down to the seafloor where Andrew Ryan had recently sunk Fontaine's Department Store. Via shortwave radio, Cohen reveals that Sally is residing in the Housewares building, and Booker and Elizabeth must get to the tram to reach it. This is found to be done only with the help of an Old Man Winter Plasmid. When the two arrive at the main building, they are immediately attacked by Splicers Ryan imprisoned in the now isolated department store. After defeating numerous enemies, Sally is found lurking in the ventilation system. The two close up all but one vent to trap Sally, and then they increase the vent temperature to force her out. Sally starts screaming due to the heat and flees to that one vent exit.

Afterwards, when Booker attempts to pull her out, he discovers she is now a Little Sister (as he feared). Booker is shocked, and when he aggressively tries pulling her out again, she calls for her Bouncer Big Daddy, who then attacks Booker. Booker and Elizabeth engage the Big Daddy and manage to defeat him, allowing Booker to attempt to reason with Sally, but to no avail. Booker, struggling to recover her, recalls his previous memories that were "hazy" to him before. In a flashback, Booker is revealed to actually have been a regretful Zachary Hale Comstock, who worked with Robert and Rosalind Lutece to take Booker's daughter, Anna, but (in a universe alternate to that of the Infinite story) ended up killing the child by accidentally having her head cut off instead of her pinkie finger when the portal closed in his fight to take her. Booker (Comstock) comes to, remembering he had the Lutece twins move him to Rapture through their Tear device so he could forget and get away from his troubles. The Lutece twins appear and criticize Comstock, saying he could never accept the consequences of his actions. As a side effect of going to Rapture through the device, he lost his memories of being Comstock and failing to steal Anna and resumed his life of being a Private Investigator as Booker Dewitt. This Comstock has no knowledge of the Infinite Universe. He could not know her origin or suddenly realize it. He is a different Comstock entirely.[2] Elizabeth, infuriated by Comstock's attempt at kidnapping her when she wasn't his true child, doesn't accept Comstock's apology and instead tells him he will be sorry. The player can hear the Big Daddy getting up, having survived the earlier ordeal. It then impales Comstock with its drill from behind. In his last moments, Comstock looks over at Elizabeth who glares at him mercilessly, covered in his blood. The screen cuts to black, thus concluding Episode 1 and setting up the story for Episode 2.

This new campaign features the city of Rapture rebuilt from scratch with game mechanics and the Unreal Engine 3 used for BioShock Infinite. It includes new weapons, new Plasmids (similar to Vigors), new Gears, and Tears. The first half of this first episode focuses mostly on the exploration of the business streets of Rapture and its story while the second half focuses on combat mechanics close to that of the first BioShock game, with scarce resources and tighter spaces as opposed to the larger, open areas of the main game.[3]

This downloadable content utilizes a weapon wheel similar to the one used for Plasmids/Vigors, allowing the player to carry all weapons instead of replacing them. 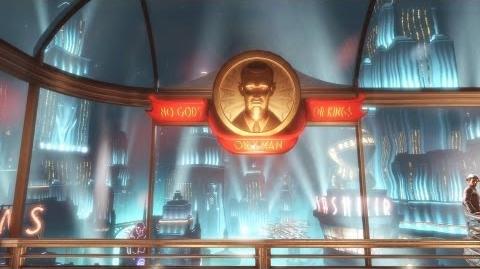 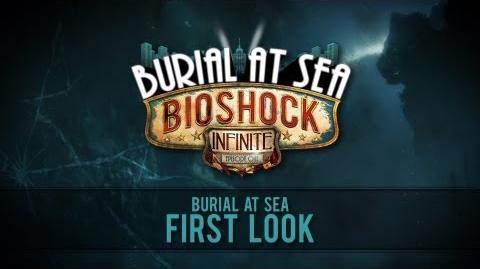 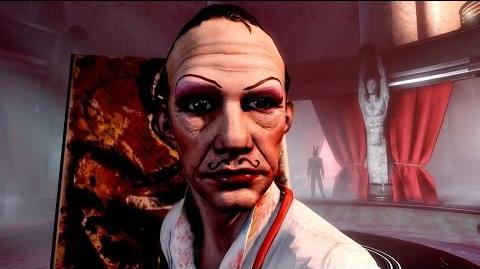 An early design for the banner, featuring Booker holding a different gun. 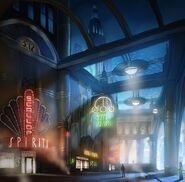 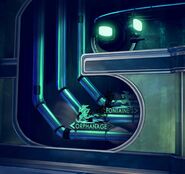 Concept art for the Pneumo Lines.

Different concepts for the appearance of Elizabeth.

Concept art for the Air Grabber.

Concept for the buildings of Rapture. 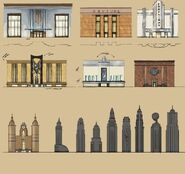 Concept for businesses and buildings.

Concept art for stores, likely to be used for Market and High Street.

Concept for the streets of Rapture.

Storyboard for the Episode's conclusion.

Elizabeth's new outfit for the DLC.

Elizabeth is waiting for Booker while contemplating the city.

Elizabeth in the DLC's trailer along with Booker using Devil's Kiss.

An early version of Market Street.

Elizabeth near an early version of Le Temps Perdu.

The Prime of Rapture.

Elizabeth at a hallway.

Sander Cohen invites you to dance.

Elizabeth and Booker getting shocked.

A prisoner who didn't make it.

The Air Grabber in action.

A Splicer firing a Tommy Gun.

Elizabeth and the Frosty Splicer.

The familiar Circus of Values.

A Need to Know Theater.

The Big Daddy is coming for you.

The Luteces appear in Rapture.