Elizabeth basks in Paris at the turn of the 20th century. However, she unexpectedly spots Sally and gives chase. As she pursues her, Elizabeth's idealized vision of the French city turns nightmarish. Her memories of Columbia, Comstock, and Sally continue to haunt her.

Elizabeth wakes up in the Toys section of Fontaine's Housewares Department shortly after the events of Episode 1. Atlas and his men take Sally away and search the corpse of Comstock for valuables. Before they can shoot Elizabeth, a vision of Booker DeWitt appears and coaches her to claim she can help Atlas escape the sunken department store. She gives Atlas information about Dr. Yi Suchong to convince him and promises freedom in exchange for returning Sally. Left alone, Elizabeth begins to explore the store and finds her own dead body amongst some rubble. She realizes that her former self was killed by the same Bouncer that impaled Comstock. However, her powers allowed her to continue existing in some form in the multiverse, and her sense of guilt about the way she used Sally to get revenge on Comstock, moved her to get back to Rapture and clean up the mess. The Lutece Twins had advised her not to venture back into Rapture, because her quantum-superposition would collapse into one last Elizabeth, mortal, without omniscience or the ability to open Tears, and cut off from the Elizabeths of the alternative universes, but she was determined to return to Rapture and rescue Sally. The voice of Booker, who states he is simply a facet of Elizabeth's subconscious, helps her in making her way through the Splicer-inhabited store. Tracking down Suchong, Elizabeth discovers the doctor knew about Columbia and built a Lutece Device connecting back to the flying city, based on the Luteces' technology. Elizabeth rationalizes that she can use the Lutece Particle that kept Columbia afloat to lift the department store back to Rapture.

She collects equipment needed to repair the vandalized device with the reluctant help of Atlas and Suchong. Elizabeth then travels through a Tear back to Columbia. She finds herself aboard The First Lady during the time when Booker and Elizabeth had stormed Jeremiah Fink's factory with the Vox Populi. She recovers the Lutece Particle easily enough, but before she can return to Rapture, Suchong closes the Tear and forces her to collect a lock of hair from one of Fink's hidden laboratories. During this, Elizabeth learns that Daisy Fitzroy was instructed by the Luteces to take Fink's son hostage to push Elizabeth into making the innocence-ending decision to kill the revolutionary and thus pass into a mature mindset. She also learns that Fink and Suchong communicated through the Tear rift and collaborated on many technological projects, such as the use and processing of ADAM to make both plasmids and vigors and the creation and conditioning of Songbird based on the Big Daddy technology. Unlike the Little Sisters, who were bonded through science, Elizabeth was bonded to her protector through an act of kindness. She retrieves the lock of hair, which turns out to be her own and escapes the scavenging Vox Populi forces to return to the Tear and get back to Rapture.

Once back, she transports the hair sample to Suchong, but, through a video monitor, comes face to face with Andrew Ryan. He secures the room and sends her an ultimatum: either join forces with him or die at the hands of his private police who are moving through the facility finishing off Atlas' followers. Elizabeth escapes and makes her way to Frank Fontaine's private office, bringing with her the Lutece Particle to the top of the sunken structure where the load bearing columns meet. As she releases the particle and causes the building to start rising, Atlas' men capture her, believing her to be more valuable than Sally. Elizabeth is overdosed with a truth serum in an attempt to discover the whereabouts of the "Ace in the Hole", and wakes up two weeks later, with the Rapture Civil War in full swing. Atlas then tortures her by threatening to lobotomize her unless she tells him where the Ace in the Hole lies. Elizabeth is unmoved by this until Atlas threatens to perform the act on Sally. In a moment of intolerable panic, Elizabeth recalls one future that she previously witnessed, and tells Atlas that the Ace is in Suchong's lab. Holding Sally hostage, Atlas sends Elizabeth to retrieve the Ace. While exploring, Elizabeth indirectly causes the death of Suchong at the hands of a Big Daddy, one that Elizabeth recently bonded with two Little Sisters. She retrieves the Ace — a simple piece of paper with a coded message from Suchong — from the doctor's corpse and returns it to Atlas, knowing full well Atlas will betray her. Atlas is furious at the contents, but in one last flash of memory, Elizabeth finds herself aboard the plane that transported Jack to Rapture, and recognizes the coded message as Jack's trigger phrase, "Would You Kindly". Secure in the knowledge that Atlas' "Ace" will also be his undoing, she translates the code. Atlas begins to form a plan for Jack to come to Rapture and kill Ryan, then fatally strikes Elizabeth again, sealing their fates and leaving her alone with Sally, "honoring" his part of the deal. As Elizabeth succumbs to her wounds, she has one last vision of the future, revealing that Jack will be the one to end the cycle of violence in Rapture and save Sally and the other Little Sisters. Sally begins to sing La Vie en Rose to comfort Elizabeth, who dies happily, content that the matters will be resolved.

A post-credits scene shows a view of Rapture and the tail of the Apollo Air Flight DF-0301 sinking towards the city — heralding Jack's arrival.

The DLC features the city of Rapture built from scratch with game mechanics and the Unreal Engine 3 re-used from BioShock Infinite. Episode 2 prominently features stealth-style gameplay and elements of survival horror, in contrast to the more action-driven approach and glamorized setting of the first episode.

Using Lockpicks, the player now has the ability to pick locks and can be used to open doors and disable turrets. Some enemies have lockpicks hanging from their belts, which the player can stealthily pickpocket.

Elizabeth is physically weaker than the previous protagonists and doesn't have a Shield like Booker did. She can't carry as much ammo and becomes inebriated after only one alcoholic drink. She is also unable to deal any damage to the Big Daddy.

When struck by an enemy, Elizabeth will lose a large amount of health, so the stealth approach becomes a necessity. When creeping up on enemies, crouching will make it harder for them to notice Elizabeth. The easiest way to get through an area is to take the enemies out one by one. Hiding is an important part of the gameplay since Elizabeth is such a vulnerable target. She can hide in air vents that will also give alternate pathways or jump on ornamental lighting sconces to avoid contact or flee.

Episode 2 features the option to cancel Plasmid/Vigor Traps, which is useful since EVE is scarce. The player can now also store up to five Medical Kits, which is not the case in the main game and previous DLCs.

With the DLC comes a brand new gameplay approach: 1998 Mode. The new gameplay option will challenge players to complete the narrative using only the non-lethal tools afforded to them. 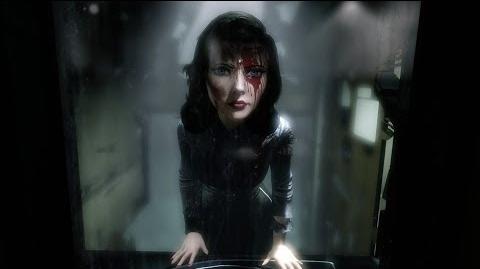 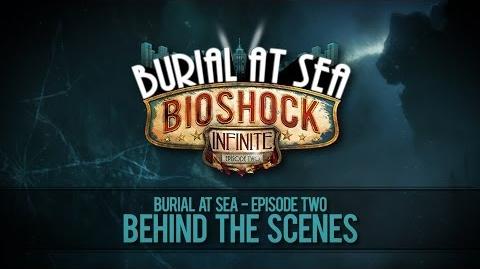 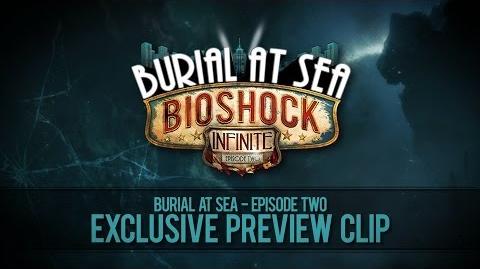 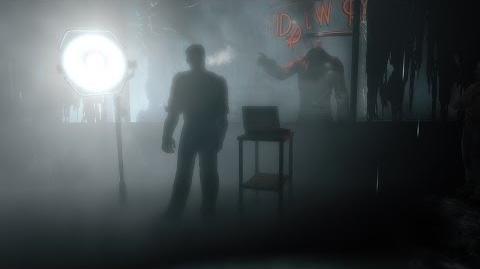 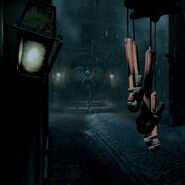 Chimes made of wrenches with a statue of Columbia in the background.

Elizabeth looks at herself in the mirror.

A friendly guitarist in a world of chaos.

Enemies lurk in the shadows.

A newspaper article about Suchong.

"The Heroes of Rapture"

Boy of Silence helmet found in the Surgical Suite.

A Handyman being operated on.

Atlas has a secret…

Elizabeth in a fight!

Ascension to the rest of the city.

"The Gateway to your Future."