Before his departure for Rapture in 1959, Orrin Oscar Lutwidge owned several companies. One of these companies contracted with Andrew Ryan to produce raw materials for the building of his underwater city. All of these were run under different aliases of Lutwidge. By U.S. law, any company conducting business while not presenting the legal name of the person who owns it must declare "fictitious business name" before opening to the public.

During the course of Mark Meltzer's search for Orrin Oscar Lutwidge in 1968, he researched many of Lutwidge's properties in New York City. When he visited the abandoned buildings of each business he found documents, tape recordings, and other clues about Lutwidge's journey to Rapture. 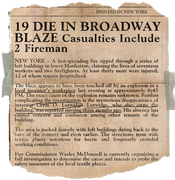 Lutwidge used this company to manage his properties, including the Scarlet Sovereign warehouse, the Arden N. Wray building (the headquarters of "Warden Yarn," previously owned by Andrew Ryan), and his private home in Queens.

This was the first of Lutwidge's old properties that Mark Meltzer visited. Before Lutwidge left for Rapture this building burned down, and Lutwidge left certain clues about his journey to Rapture, including the "For the Seeker" recording and the Vault Puzzle.

In 1947 Lutwidge used this company to publish A Child's Garden of Cyphers under the alias "Orson Orville Liddell".

This company is listed as a subdivision of Warden Yarn Corporation, which was located on Park Ave in New York City. Andrew Ryan, the owner of "Warden Yarn," became partners with Scarlet Sovereign and contracted with them to purchase large amounts of steel construction material in 1946. Apparently this contract involved some peculiar conditions about confidentiality and the promise of future ownership of "several lucrative New York real estate properties." These properties were probably locations owned by Ryan that he would no longer need after Rapture was finished. It is likely that Lutwidge meant to sell these properties through his company, "Lutwidge Property Management", as seen above.

After Rapture was finished this contract fell through, leaving Scarlet Sovereign with a surplus of material and nothing to do with it. This prompted Lutwidge to write Andrew Ryan a letter about his concerns of Scarlet Sovereign being used as a "shield" for Ryan's covert operations.

This building was originally the headquarters of Andrew Ryan's "Warden Yarn" company. After Ryan left for Rapture this property presumably fell into Lutwidge's hands, as per the contract with Scarlet Sovereign. Lutwidge had a basement lab beneath the office building. It is here that Auger Detection found him after his return from Rapture in 1960. Mark later visited this building and found Lutwidge's "Utropolis" manuscript, the "Terra Incognito" #XVI = le Maison Dieu recording, and other mementos from Rapture. Here Lutwidge also left the tiles of the "White Knight's Question" before disappearing in 1958.

A bill from Scarlet Sovereign to Warden Yarn.

Auger Detection's report on Lutwidge's properties.
Add an image to this gallery
Retrieved from "https://bioshock.fandom.com/wiki/Businesses_Owned_by_Lutwidge?oldid=306581"
Community content is available under CC-BY-SA unless otherwise noted.