Buttons is a Splicer model that appears exclusively in the Minerva's Den DLC for BioShock 2. A technician who once worked on The Thinker with Charles Milton Porter, Buttons has an obsessive-compulsive disorder for overthinking logic and equations, and is willing to kill for a solution.

The following are phrases that Buttons says in Minerva's Den. The name of the source audio file is listed when known.[Audio files needed]

Though just as mad, Buttons bears fewer scars from splicing or the Rapture Civil War when compared to the average Splicer. His teeth are gnarled, there's a deep, diagonal cut which has been stitched closed in the middle of his forehead, he has deeply prominent veins around his brow and face, his right eye is bulging, and he appears to have a lesion above it. He wears the laboratory coat of a scientist, a white dress shirt and tie under a sweater vest, a pair of herringbone-pattern pants, a set of black Oxford-style shoes, and a Rapture Central Computing identification tag. His clothes are tattered and dingy. In each of his coat pockets are about eight different pens, no doubt a sign of his obsessive-compulsiveness. His hair has a sharp widow's peak and is balding in the back of the scalp. Buttons can wear a pair of glasses as an accessory.

Model 1: The primary model is a bit different from the concept art. He has dark skin, black hair and black eyes. His lab coat is bright blue and is covered in dark green stains, with some scribbled writing around one of the pockets. There is a large blood stain on the front and on the back near the hemline. His pants are brown, his sweater vest is dark blue, and his tie is black. He has a pencil-thin mustache, and the skin under his right eye is sagging.

Model 2: This model has light skin, dirty blond hair and blue eyes. His lab coat is black, and his pants are ivory-colored. His sweater vest is grey and his tie is red, and he is clean-shaven.

Model 3: This model has tan skin, auburn hair and blue eyes. His lab coat is white, and his pants are dark green. His sweater vest is grey and his tie is green, and he is clean-shaven.

Model 4: This model has light skin, white hair and blue eyes. His lab coat is yellow, the cuffs on which are soaked with blood and his pants are black. His sweater vest is grey and his tie is purple, and he is clean-shaven. 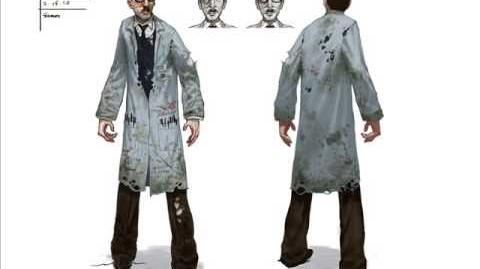 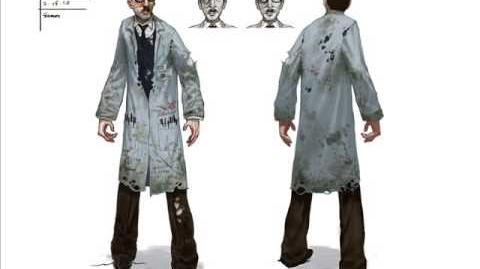