Camellia is one of several brands of cigars sold throughout Rapture. Camellia cigar boxes are decorated with the eponymous flower. Unlike Oxford Club and Nico Time, Jack cannot smoke the Camellia cigars. Boxes of Camellia brand cigars, along with their competitor Habana Especial, can be found in houses of the wealthy, in tobacco/ cigar stores, and even in the trash. Individual cigars of both Camellia and Habana Especial are wrapped with cigar bands. The former's is pink colored, while the latter's is yellow.

The top of a Camellia box. 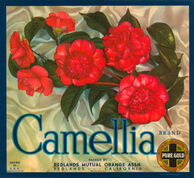 The image that inspired the brand.
Add an image to this gallery

Retrieved from "https://bioshock.fandom.com/wiki/Camellia?oldid=299051"
Community content is available under CC-BY-SA unless otherwise noted.