“That's the thing about the sea, now isn't it? It's always been the place of dreams… Symbols of the subconscious, so I've heard… All the ghost ships, the mermaids… all the things that sailors see out here. Are they real things, or reflections? Huh. Our own minds stirring in the water…”
― Captain Casey Ferrence[src]

Captain Casey Ferrence is the captain of the S.S. Nellie Bly, a WWII Liberty ship[2] that was re-outfitted as a cargo freighter.

Captain Ferrence was originally a member of the US Navy. Ferrence previously worked as a maritime pilot in Hong Kong, however, he was eventually dishonorably discharged for his violent mood swings and reckless nature. Ferrence has hated the U.S. government ever since, and this has led to his rebellious actions of hiring draft dodgers to crew his ship and harboring various fugitives and political refugees.

At one time Ferrence was a crew member on a ship that smuggled contraband items through the Frozen Triangle. This cargo contained a large number of religious artifacts, but Ferrence never got to see the destination since he was left behind in Reykjavik, Iceland after asking too many questions.

The Captain is well acquainted with philosophical and psychological literature, and has a large bookshelf full of classics in his personal quarters. He does not drink alcohol, and he is often prone to mystical thinking.

There's Something in the SeaEdit

Mark Meltzer was first introduced to Ferrence by Phil Isidore at the beginning of Phase Three of Something in the Sea. Mark Meltzer purchased passage on Ferrence's ship in order to go searching for his kidnapped daughter overseas. and Mark believes that he was accepted as a passenger on the ship because Captain Ferrence is "sympathetic to the cause."

Mark has described the Captain as "brusque" and "mysterious." Mark initially seemed to respect Captain Ferrence, and was surprised that a down-to earth person like the captain was acquainted with Phil Isidore. However, the Captain's strange behavior soon made Mark realize that the Captain was not as stable as he first appeared. On one occasion Mark mentioned the naval AUTEC[3] project to Ferrence and the captain steered the ship so close to the naval base that a military plane flew over to warn them away. Ferrence also acted strangely about the cargo that the Nellie Bly picked up in Nassau. Ferrence was very strict about keeping it locked up and secure. When the ship stopped in the Dominican Republic the Nellie Bly's Second Mate discovered a group of political refugees, loyalists to ex-Pres. Juan Bosch[4] hiding in the hold. Ferrence handed them over to the military junta[5] rather than risk a closer inspection of his ship.

Mark assumed that this was to avoid inspection of the crew's papers, many of whom were American draft dodgers.[6] However, Captain Ferrence seemed paranoid after that, and steered the ship into the path of Tropical Storm Hedy rather than risk staying in Puerto Plata.[7] Ferrence stated that the primary mission of the ship was to protect the cargo - regardless of all risk. This angered the crew, splitting them into factions that supported the captain, led by the Bosun, and those who did not, led by the First Mate. The Nellie Bly weathered the storm, but afterward it was revealed that the Captain's precious cargo was nothing more than crates of cheap, plaster Buddha statues. This increased Mark's doubts about the captain's sanity.

Later in the journey the Captain continued to act strangely, and the tensions between him and the first mate increased. Finally this culminated in a fight between them when the ship docked at a French port in La Havre. Ferrence insisted that the first mate leave the ship, but this resulted in over half the crew deserting. This same night Mark discovered that the real cargo hidden inside the plaster Buddhas was smuggled hand guns.

Captain Ferrence managed to recruit new people for his ship in earlier January, allowing Mark to continue his journey north toward England. Ferrence's new crew was barely competent. They were more interested in the guns within Ferrence's cargo than they were with properly manning the ship. Ferrence had apparently picked them up because he was sympathetic to their revolutionary cause, and he promised to take them to Holland after he had finished with his obligation to Mark Meltzer. Ferrence began to trust his crew less and less as they became restive at the delays.

After an attack on the crew by unknown assailants, possibly Splicers, the Nellie Bly was discovered by an American cargo freighter, which discovered that Ferrence, along with the rest of his crew, was dead. 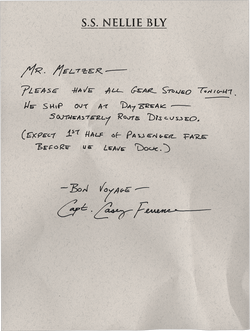 MR. MELTZER —
PLEASE HAVE ALL GEAR STOWED TONIGHT.
WE SHIP OUT AT DAYBREAK —

(EXPECT 1st HALF OF PASSENGER FARE

BEFORE WE LEAVE DOCK.)

"Well, Mr. Meltzer… That's the thing about the sea now isn't it? It's always been the place of dreams… Symbols of the subconscious, so I've heard… All the ghost ships, the mermaids… all the things that sailors see out here. Are they real things, or reflections? Huh, Our own minds stirring in the water… Oh I heard tales about this "Frozen Triangle" you're on about… I've been through it many times myself. And I do believe, chief, I do. Strange waters run through it; but none so strange as the waters in our minds."

"Damn it all, we're not dumping that cargo. I made a promise to deliver it, and it'll be delivered. And maybe you don't know it, lad, but things are changing. There's a revolution goin' on in the streets, and Christ, I thought you were with me on this. I thought you hated the warmongering fascists who've been running this world. Well, that cargo was intended for some people who are doing somethin' about it, and we're not leavin' port until we find 'em."

"So what precisely are you threatenin', comrade? Mutiny, is it? Go on, y'ungrateful bastards. Not one of the lot of you bourgeois pricks can sail this bucket on your own. You're not even worthy to swab my filthy goddamn deck. Now listen close, I made that fella Meltzer here a promise. I came through for you, now we come through for him. We get him where he needs gotten, and then I haul you and this cursed cargo to the arse end of the earth. You best put them guns away unless you fix to use them."

Captain Ferrence:"What the hell was that?"

Crewmember 2:"Captain Ferrence, Captain Ferrence! Someone bring around the spotlight! (Italian Speaking) There! There, the boat! Do you see them? The eyes, they're watching us! The eyes, hey, (Crew members name) , hurry, hurry, they're swimming away! You missed them! Bring the light back around! I know what I saw, they were there. I swear, they were there, watching us!"

Retrieved from "https://bioshock.fandom.com/wiki/Casey_Ferrence?oldid=313397"
Community content is available under CC-BY-SA unless otherwise noted.