Chad King is an artist and worked on the art development for BioShock and was the Senior Artist for BioShock Infinite as well as for its two story driven downloadable content.

Chad King studied illustration at Ringling College of Art and Design in Sarasota, Florida, from 2004 to 2006. He was hired to work on the video game Superman Returns (2006) as a Associate Texture Artist, under EA Tiburon and later for BioShock. While hired by Irrational Games, he worked in many sections as an artist, including as a concept artist, effect artist, model artist and on the downloadable content the Challenge Rooms. Chad was once again hired by Irrational Games to work on BioShock Infinite, for which he was a mentor various artists for their work to fit the game. King also provided concept art and models for the game and some collaboration work on BioShock Infinite's logo and on the "Monument Tower cross-section model" with Gavin Goulden. Other models include: the elevator button, dolls, Columbian buildings and substructures, Tears and the Regent cinema marquee, seen through a Tear to Paris. King later worked on Burial at Sea - Episode 1 and Episode 2, for which he provided, among others, the Need to Know Theater models, the Pneumo system and statues for Fontaine's, which he worked on together with Laura Zimmermann.[1] In 2014, King was hired to work on the space adventure ADR1FT (2016),[2] on which Hogarth de la Plante also worked on, under Three One Zero.[3][4] King, along Robb Waters, was hired to work on the game The Black Glove under Day For Night Games,[5] but the project was shelved.[6] As of early 2017 he is listed as working for Ghost Story Games as Lead Modeler.[7]

Concept art for a bridge.

Concept art for a Finkton building and clock.

Concept art for a church.

Early concept art for the Gondola.

Concept art for the Factory. 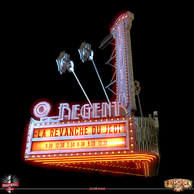 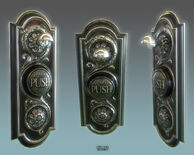 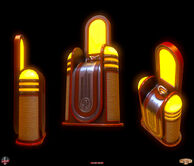 The Need to Know Theater model.
Add an image to this gallery

Retrieved from "https://bioshock.fandom.com/wiki/Chad_King?oldid=322008"
Community content is available under CC-BY-SA unless otherwise noted.