“Welcome to the BioShock Challenge Rooms!
Please note that while this is a BioShock product, it is NOT meant to extend the BioShock story, or connect to the narrative events of the main game. This is a separate product, intended to be enjoyed on its own merits. We do recommend that you play BioShock first, to gain familiarity with the game's interface and systems.
These challenges require a mixture of puzzle solving, exploration, combat and experimentation. Each provides a different kind of experience. We hope you enjoy them!

The Challenge Rooms are a series of new areas that exist outside of the main BioShock narrative in Rapture and test the player's abilities at solving puzzles and combat. They were originally part of an exclusive downloadable content package for the PlayStation 3 version of the game in 2008, which costs $9.99. In January 2013, it became widely available for consoles in BioShock: Ultimate Rapture Edition. Challenge Rooms became available on PC with the release of BioShock: The Collection in September 2016. There are a total of three challenge rooms, each with their own separate trophies. Each room starts off with the cover of a comic book by Sander Cohen that is done in the style of classic EC Comics from the 1950s.[1]

This challenge room takes the player to the Rapture Firing Range where they have to figure out a way to defeat a Big Daddy without any weapons or offensive Plasmids. A video of this can be seen here.

A Shocking Turn of Events[]

A Little Sister is stuck at the top of a Ferris wheel. Without the use of Electro Bolt the player must use various weapons and Gene Tonics to create an electrical charge to the Ferris wheel controls to get her down. A new Tonic, Instant Piano Prodigy, is found here as well. A video of this can be seen here.

This is a purely combat-focused challenge room. Players clear a sequence of rooms inhabited by various types of enemies in any order they see fit. Upon clearing a room, they are given more money and ADAM to buy new ammo and Plasmids. A video of this can be seen here (part 1/9). 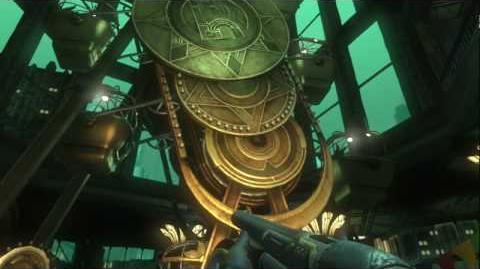 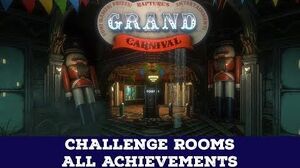