“It's loss that brought me to Rapture. The loss of my wife, Pearl… The Thinker is all I've got, now…”
― Charles Milton Porter[src]

Born in Chicago,[citation needed] Porter was a gifted mathematician. As a young man, he moved to Pennsylvania to attend Lincoln University, one of the first U.S. universities to grant degrees to black students in the country. Porter soon met Pearl at her mother's diner, and the two would eventually get married and travel the world. With his advanced degree in Mathematics, Porter was chosen by Alan Turing[4] for his WWII codebreaking team at Bletchley Park.[5] During his time there, however, he suffered a terrible loss; the death of his wife during London's bombardments, and when the war ended, he allowed himself to be recruited by Andrew Ryan. And so, he left the surface for Rapture, bringing with him one of the reproductions of Rodin's statue, The Thinker,[6] and all his memories since he met Pearl, as he remained obsessed by her tragic death, although willing to move on.

Porter came to Rapture to build and operate the most advanced mainframe computer the world had ever seen, used to run computerized and automated technology in the city. As inspired by the idea of The Great Chain, Porter was more determined to succeed by the accomplishments of his own intellect to serve Rapture and Ryan, rejecting the pressures of the city's social climate, from suggestions to splice white to "get ahead",[7] or later rejecting Sofia Lamb's invitation to her "half-baked metaphysical mumbo-jumbo."[8]

Using all the advanced technology Rapture had to offer, Porter created, with his associate Reed Wahl, Rapture Central Computing,[9] the center of Rapture's computing power and its most powerful mainframe, the Rapture Operational Data Interpreter Network, named "The Thinker." This advanced computer was capable of controlling the city's automated security systems (the circuitry of which was also designed by Porter) and coordinating various workings and functions of the city's infrastructure.

Deeply grieved over his wife's death, Porter viewed his computer creation as his only close companion. Using the knowledge he gained while working alongside Turing, he sought to "humanize" the Thinker, allowing it to think for itself and behave like a living person. During that time, he also fed the Thinker data on Pearl, his wife, seeking to allow the Thinker to bring her back to some degree through its advanced approximation of her personality.

Porter came in conflict with his colleague and associate Reed Wahl. Wahl accused him of misusing and wasting the technology, of attempting to turn the Thinker into a person rather than harnessing its predictive potential.[10] Wahl believed that the Thinker could foretell the future through equations and algorithms with which all humans are potentially predictable,[11] but Porter brushed these theories off.[12] He thought splicing had driven Wahl, like many others in Rapture, mad.[13] Wanting the Thinker to himself, Wahl used it to forge a recording in Porter's own voice pledging loyalty to Fontaine and provided it to Andrew Ryan. In response, Ryan claimed it as evidence of treason and sent his men to take Porter, and had him incarcerated in Persephone.[14] Ryan then assigned Wahl to replace Porter in controlling the Thinker.[15]

While a prisoner in Persephone, Augustus Sinclair rented Porter out to the Protector Program in Fontaine Futuristics (which was now under the ownership of Ryan Industries), where he became the 18th Alpha Series prototype, Subject Sigma. Although most Alpha Series were supposed to be bonded to a single Little Sister, Sigma never made it to the bonding process,[16] before being deactivated and placed in cold storage.[17]

In 1968, with the aid of a friend and former genetic scientist Brigid Tenenbaum, Sigma is revived with full free will, to help her retrieve the Thinker's program from Wahl. Minerva's Den was cut off from Rapture through normal means, although Wahl and Splicers still survive within. During the story, Sigma is guided by Porter, who helps him reach The Thinker, leaving Sigma unaware of his identity.

It is revealed that Subject Sigma is in fact Porter. When he was moved to Persephone for the fake recording, he was enrolled in the Protector programs and was made into an Alpha Series Big Daddy. The Thinker had used its personality approximation to impersonate Porter as a trustworthy voice to guide him. Once Wahl is defeated and The Thinker's code is collected, Porter leaves Rapture along with Tenenbaum.

Return to the Surface[]

After returning to the surface, Tenenbaum restores him back to an un-spliced state and they work together for solutions. By this time, he has come to terms with his wife's death, leaving a letter explaining that he is ready to 'let her go her way' on her tombstone. 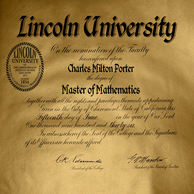 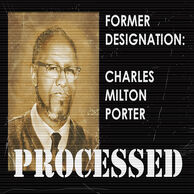 Charles Milton Porter, as processed by The Thinker.

The color version of the Please Stand By image used on Charles' Television.

Charles, standing over his wife's grave after returning to the surface.