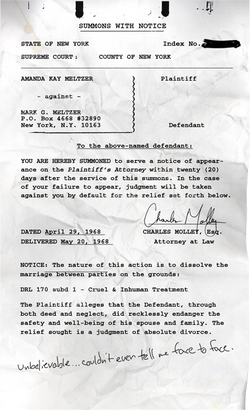 Charles Molley, Esq. is Amanda Meltzer's defense attorney. He was hired to take care of the divorce proceedings between Amanda and Mark Meltzer. Charles heckled Mark throughout Phase Two, sometimes bringing about delays in his research on Rapture. Near the time Mark left in the S.S. Nellie Bly, Charles froze the account Mark shared with Amanda, which acted as his only source of funding at the time.

"Uh, Yeah, Good day Mr. Meltzer. We haven't spoken before, but I'm quite sure we're going to become very well acquainted. My name is Charles Molley, I'm the attorney for Amanda Meltzer. I've been waiting to hear a response regarding the summons you were sent several weeks ago. But more to the point, I understand that you have been repeatedly telephoning my client in the last few days. Now, she has made it quite clear that she does not want to speak to you, Mr. Meltzer. I would prefer we do not have to formalize that with a court order. If you have anything else to say to her, I'd strongly suggest it comes through me. Thank you, Mr. Meltzer."

"Uh, yeah, hi. This is Charles Molley, uh -- representing your wife Amanda, in the divorce filing. Uh -- it has come to my attention that the joint account you share with Amanda has been rapidly depleted in recent months. As you already discovered, I have taken steps to have these assets frozen, pending a settlement. That money also belongs to Amanda, Mr. Meltzer. Now, I know that you haven't had a job with any positive income for some time. You might want to look into that. Good day, Mr. Meltzer."

"Mr. Meltzer, this is Charles Molley, Esquire... representing Amanda K. Meltzer in the matter of the divorce. I understand there were a few panicked phone calls over the weekend, something about a children's book that belonged to your daughter? I'm led to understand you've liquidated the last of your family assets? Your neighbors seemed to believe you were packing up for some extended trip. I do hope that isn't true, Mr. Meltzer. We have a court date very soon, and I will be very disappointed if I don't see you. You can't run away from your problems, Meltzer. Do call us back, won't you?"

Retrieved from "https://bioshock.fandom.com/wiki/Charles_Molley?oldid=314581"
Community content is available under CC-BY-SA unless otherwise noted.