“The occasion is right… for Chechnya.”
― Chechnya Vodka advertising[src]

Chechnya Vodka (Чеченcкaя водка) is one of the several different types of drinking alcohol found in Rapture. Alcohol restores Health, but drains EVE. If multiple units are consumed back to back, a short duration of blurry/double vision will occur.

As with all alcoholic beverages, the Incinerate! Plasmid can turn this drink into a deadly weapon. Throwing the resulting flaming drink with Telekinesis will turn it into a makeshift Molotov cocktail.

The back of the Chechnya Vodka bottle. 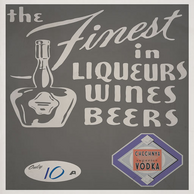 The advertisement for Chechnya Vodka as seen in BioShock's trailer.

The slightly altered advertisement as it appears in Mafia II.