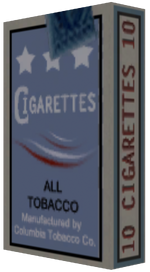 Cigarettes are a recreational drug found all over Columbia. Unlike in BioShock, which had a relatively ample selection of smokables, there seems to be only one or two brands in all of Columbia.

Manufactured by the Columbia Tobacco Co., each box of ten is five cents.

Cigarettes can be most commonly found laying out in the open, but will occasionally pop up in trash cans, in containers, and on corpses. Smoking a pack will take away a small sliver of health. This tiny decrease is more than made up for in the relatively large amount of Salts they give you. 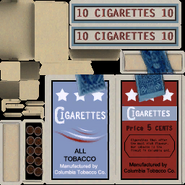 Texture for the cigarette pack.