BioShock Wiki
Register
Don't have an account?
Sign In
Advertisement
in: Spoilers, There's Something In the Sea Characters, BioShock 2 Characters
English

Blonde (There's Something in the Sea)
Brunette (BioShock 2)

There's Something in the Sea
BioShock 2

Jodelle Ferland
Cindy A. Meltzer is the daughter of Mark and Amanda Kay Meltzer,[2] born on the 25th of August, 1961.[1]

Cindy was kidnapped by a Big Sister while staying at the Meltzer's seaside residence in Montauk, Long Island New York. Her disappearance was reported to the papers on Friday, October 27, 1967, making her six years old when the Big Sister kidnapped her. Strangely enough, Cindy's characteristics do not match those of the other girls who were kidnapped. Cindy is blonde, whereas the other girls were brunettes. Cindy's kidnapping was most likely the result of Mark attracting the Big Sister's attention by predicting her movement patterns and following her.

According to her mother, Amanda, Cindy was interested in spies and codes at a young age. Mark bought her Orrin Oscar Lutwidge's A Child's Garden of Cyphers. Later Cindy presumably used this code to leave the markings on the outside of the Lunchbox Puzzle. The contents of the box are of Cindy’s handiwork, according to Mark. Cindy's voice is also recorded at the end of the “Rise, Rapture, Rise” record that appeared in Mark's office. Judging by the characteristic metallic echo in her voice during the recording, it is very probable that Cindy has already been turned into a Little Sister.

A full year after the date of Cindy's kidnapping, a Rapture-like city made of sand castles appeared on the beach near the Montauk house where Mark was staying. It was also accompanied by a message written in the sand in cipher coding, encouraging Mark to keep searching. Cindy's involvement has not been confirmed for any of these items, but evidence of the Big Sister, including a personal sighting by Detective Benny Stango, has been present every time the artifacts appeared. Mark believes that all of these strange items are messages sent to him by Cindy, with the help of the Big Sister. His search to find Cindy eventually caused him to seek Rapture's location. When Mark neared the lighthouse which housed the entrance to Rapture, Cindy left a message for him again in the form of a childlike drawing of herself at the lighthouse with a short cipher message.

Cindy, as a Little Sister, has an interesting kinship with the Big Sisters in Rapture. Although she received the Little Sister conditioning, she could still remember her father and would leave him (through a Big Sister) messages and clues urging him to find her.

When Mark arrived in Rapture shortly before the events of BioShock 2, he began his search for Cindy. He soon learned of the fall of Rapture, as well as Sofia Lamb's plans for the Little Sisters and the 'Rebirth' of the Rapture Family.[3] He encountered several of the missing girls turned into Little Sisters, and he feared that Cindy had become one of them.[4]

When Subject Delta drained Dionysus Park and flooded Siren Alley, Mark quickly entered Dionysus Park. In the carousel of the park he finally found Cindy, who had been turned into a Little Sister and no longer recognized him. Mark was desperate to know how to cure her, but their reunion was cut short when Mark was attacked by a Big Sister and taken to Lamb in Fontaine Futuristics.[5] Lamb gave Mark the choice to either be executed or be reunited with Cindy as her protector Big Daddy. Mark chose to become a Big Daddy in order to remain with Cindy, which was all that he wanted.[6]

In the Fontaine Futuristics testing facility, Subject Delta encounters Mark Meltzer in the form of a Rumbler escorting Cindy. The player has the choice to Harvest or Rescue her if Mark is killed.

The captions for the photos consist of what Mark has written on the back of each picture. It should be noted that when the last picture was taken, Mark was tracking the Big Sister at the time. 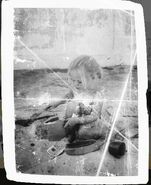 My daughter the architect. Getting ready to build the castle! 7-4-63

Message (from Cindy?) during Mark's journey to the Lighthouse. "Hide and seek, Daddy. You are getting warmer."